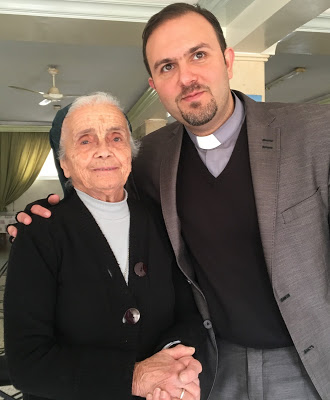 A delegation from Mennonite Central Committee recently returned from Syria, the first visit of its kind since the start of the civil war there in 2011. MCC’s $34.6 million humanitarian response in Syria and Iraq is the organization’s largest since World War II. Ron Byler has written a series about his time in Syria. The other two posts in the series are available here and here.

“You have five minutes to decide,” Sister Valentine told them.

In spring 2012, caught between the shelling of the Syrian army and opposing rebels in the Presbyterian church’s elderly care center in Homs, Syria, Sister Valentine asked her employees whether they would stay to care for the older residents.

And then Sister Valentine said, “Whatever you decide, I am staying.” One-by-one, more slowly at first, the other employees also agreed to stay.

Later, Sister Valentine ventured out into the streets alone amidst the rocket fire to buy bread for the residents, so that her employees, all with families, could stay inside the home where they were safer.

Homs, the third largest city in Syria and a religiously diverse community with Sunnis, Alawites and Christians, was under siege for four years until government forces began to prevail in 2015. By May 2017, the Syrian government had reclaimed control of the city.

The Rev. Mofidi Karajili, pastor of the Presbyterian congregation, arrived in Homs just after the destruction in the city began in 2012. When our group of Mennonite Central Committee (MCC) people visited partner organizations in Syria, he told us it is not common for Protestants and Catholics to share this kind of ministry for the elderly at the care center, but he and Sister Valentine have made a good team.

From the rooftop, Pastor Mofidi points out the severely damaged buildings of the Orthodox, Catholic and evangelical churches nearby. For a period of time after the bombing stopped, all of these churches used the elderly care center for their worship.

Pastor Mofidi shares the ways MCC has provided support for his congregation’s ministries in the city, including food parcels and cash gifts. “Without your help,” he says, “the lives of some of these families would have been entirely dark and some may not have survived.”

Later, we visit the congregation’s Peace Kitchen, which employs several neighborhood women and raises money for the church so they can help other people in need.

Pastor Mofidi tells us that, since the war, it is very unusual to see Westerners in Syria. He says that when Iraq suffered years before, he did not think to visit them, but we from MCC have come to Syria and MCC is showing others what it means to follow Jesus.

For us visitors, people like Sister Valentine and Pastor Mofidi show us what it means to serve and to follow Jesus.