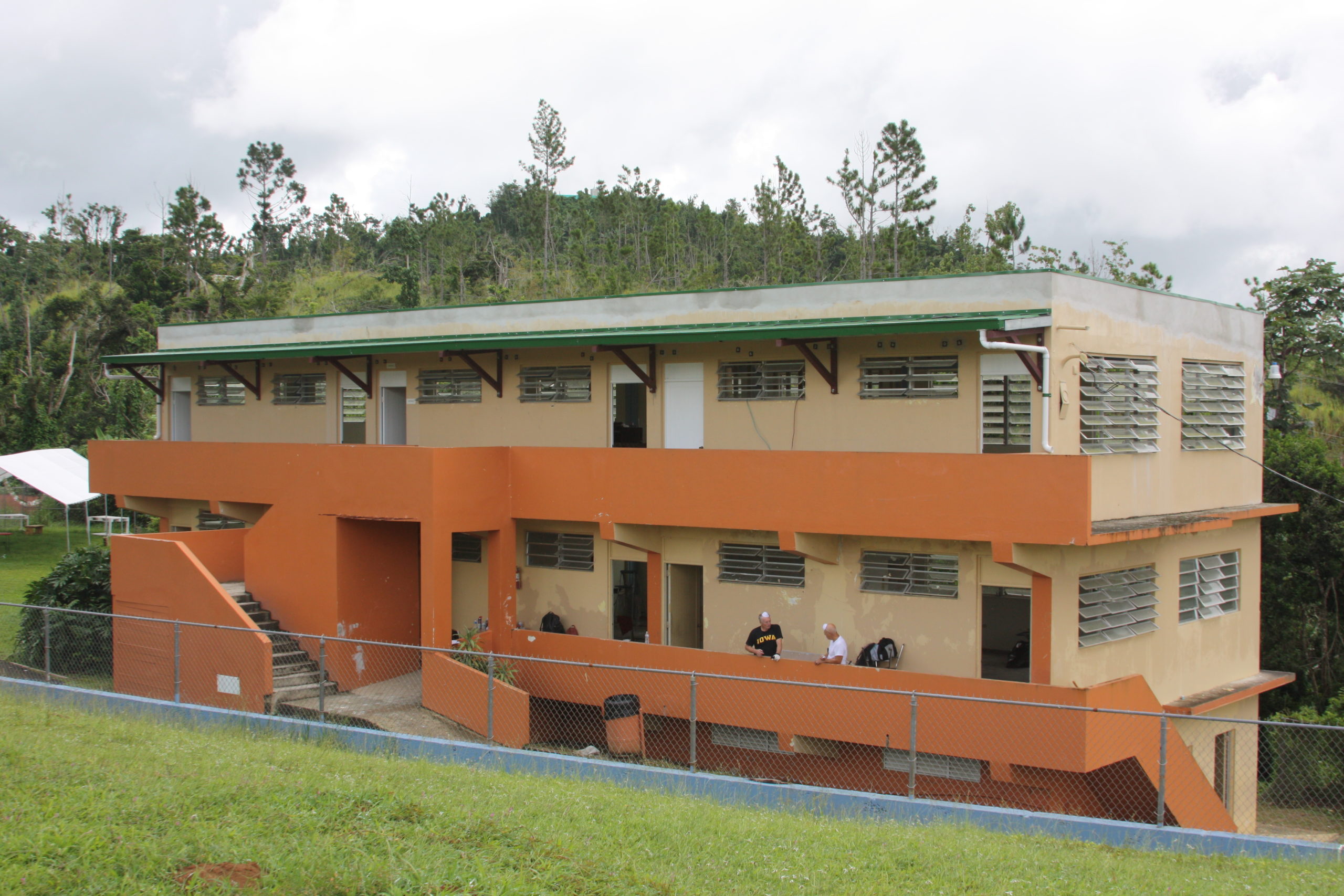 Photo: Volunteers from MEA and MMN staff and board work on the Ana K. Massanari Building at Academia Menonita Betania to restore damage caused from Hurricane Maria. Photo by Kayla Berkey.

Students, families, friends and visitors from Mennonite Education Agency (MEA) and Mennonite Mission Network (MMN) lined the basketball courts at Academia Menonita Betania on Oct. 27 for music and dance performances to celebrate the school’s 70th anniversary. The festivities included a bounce house and swimming and ended with a hog roast meal.

Betania, a pre-kindergarten through ninth grade school affiliated with MEA and a partner of MMN, is now one year past its 70th year, but the school postponed the anniversary celebration after Hurricane Maria hit Puerto Rico on Sept. 20, 2017, causing significant damage.

MEA and MMN held their quarterly board meetings at Betania Oct. 26-27, and several board and staff members and their spouses arrived days before the meetings to work on the school’s Ana K. Massanari Building, which lost its roof in the hurricane. Mennonite Disaster Service finished installing a new roof in early October, and the volunteers from MEA and MMN spent the week scraping and painting the ceilings and walls that experienced rain damage from a year without a roof. They also helped build a new wall to create an additional classroom.

“The work this week has increased my hope that next semester we will reopen the building,” said Zayas. “I was amazed that these groups decided to come before their meetings to help the school.”

Recovery efforts from Hurricane Maria were slow across Puerto Rico, with many people waiting months for power, adequate shelter and proper medical care. In the time immediately following the hurricane, Betania closed for three weeks, re-opening without electricity or water and receiving students back regardless of whether families could pay tuition.

“It’s important to talk about the level of emotional trauma that people experienced in the hurricane,” said Carlos Romero, executive director of MEA, who served as an administrator at Betania from 1985 to 1990. “It becomes difficult to engage in long-term work when you are just trying to survive. I am amazed at what the school has been able to do in a year.”

MEA and MMN jointly launched a fundraiser for Betania in October 2017, and through it, donated over $180,000 to the school. Some of this money has gone toward replacing equipment and buying construction supplies for the Ana K. Massanari building. Much of it will go toward furnishing the building, which is currently empty, Zayas said.

MMN provided volunteers this year through their Mennonite Voluntary Service and SOOP programs to support the teaching staff and collaborate with relief efforts. Funds and volunteers have also been donated and coordinated by Mennonite Disaster Service and 2gether in Mission.

“I feel fortunate to have been able to experience the school, the community and the people,” said Wil LaVeist, senior executive for resourcing and engagement at MMN, who visited Betania for the meetings. “Mission Network’s partnership with Academia Betania continues to be mutually beneficial.”

A second building at Betania suffered damage that is beyond restoring, Zayas said. He has hopes to tear it down and rebuild it for high school classrooms to expand the grade levels offered by the school.

“The building we’re working on restoring now took many years to build and finalize because the school added to it slowly as they raised the money,” said Romero. “That is the reality people here are facing. The financial means to build something new is very limiting.”

Zayas requests prayers for the teachers and that school enrollment would continue to grow.

“This is a good place for the kids. They are happy here,” he said.