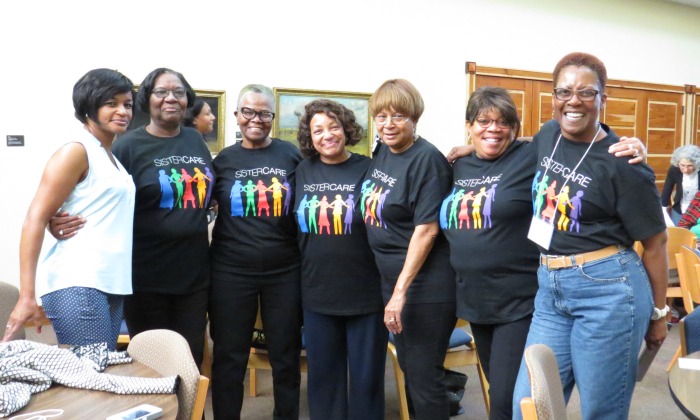 For the past four years, Hyacinth Stevens has envisioned a Sister Care seminar designed for the reality of African-American women. On Apr. 21-22, her dream was realized when she co-led such an event with Cyneatha Millsaps at the Mennonite offices in Elkhart, Indiana.

Sister Care is a ministry of Mennonite Women USA. The Elkhart seminar was made possible through a grant from The Schowalter Foundation and partnership with the African-American Mennonite Association and Mennonite Mission Network.

Carolyn Heggen, a psychotherapist specializing in trauma healing, and Rhoda Keener, Sister Care director for Mennonite Women USA, developed materials and first taught Sister Care together in 2010. Since then, these seminars have been held in more than 15 countries and in every conference of Mennonite Church USA. The objective is to help women live into their own healing so they can care for each other as they encounter difficult experiences.

In 2013, Stevens, who co-pastors King of Glory Tabernacle in Bronx, New York, works with Mennonite Central Comittee (MCC) East Coast, and is a member of Mennonite Women USA board of directors, met with Heggen and Keener and four other African-American women to take the first steps toward her dream of adapting the Sister Care curriculum.

Now, four years later, Stevens teamed up with Millsaps to lead the first Sister Care seminar focusing on the African-American reality. Millsaps, a pastor at Community Mennonite Church in Markham, Illinois, is transitioning to a position with MCC Great Lakes Region.

Together, Millsaps and Stevens led 59 participants through the four sections of the Sister Care manual: claiming our identity as God’s beloved daughters, caring for self and others, compassionate listening, and transforming loss and grief.

While the original Sister Care experience includes many interactive suggestions, such as journaling, timelines, and art projects, Millsaps and Stevens added leader-and-response singing, rhythm-and-blues recordings, dancing and a praise team of three girls from Church Without Walls.

“Our present is wrapped in our past that began when our ancestors stepped off the boats as slaves,” Millsaps said.

She went on to describe her own reality of being cared for by her 12-year-old sister, who juggled the needs of three younger children and a sick mother. Also, many African-American families don’t put their aging parents into nursing homes. This means that a woman can be caring for four generations: her parents, children and grandchildren, and herself.

“Self-care is hard to create for women of color. The many challenges facing them often do not leave space for self-care. Compassion fatigue is our daily life,” Millsaps said, as she described its symptoms: exhaustion, sickness, loss of hope, and anger.

“We often hear the term ‘angry Black women.’ We have a lot to be angry about. We need someone to come alongside us and say what part of the load they will help carry rather than labeling us as angry,” she said.

Seminar participants designed masks with symbols they use to hide their true selves. Rose Williams wore her mask while she gave her testimony. She removed it as she ended her sharing, with the words, “I found me.” Williams found a new purpose in life when Pastor Cora Brown helped her find healing in Jesus and Church Without Walls became her community in Elkhart, Indiana.

Tantra Taylor, leader at New Foundation United in Christ Fellowship, also mentioned the mask-making activity as one of the most meaningful parts of the event. “I think I’ll hang my mask up on the wall [as a reminder]. We take on and put on so much.”

Taylor found it “rejuvenating to the spirit to hear other people’s stories. It’s different to hear from someone who’s going through the same thing you’ve gone through. It’s cleansing.”

Stevens told about how she was traumatized as a child by the treatment she received while attending a Christian school, but went on to show how resilience grew out of the devastating experiences she endured. She asked the seminar participants to look at the timelines of their lives that they had drawn and to see what trauma needed healing. She compared the feelings of worthlessness and shame to a caterpillar that could become a beautiful, free-floating butterfly.

“God is looking at our timelines right now,” Stevens said. “Where are the places that need transformation? Ask yourself, ‘When is it time to fly because Jesus touched the trauma in my life?'”

She invited the women to write their prayers for situations that needed to be touched and transformed by Jesus and to put them in a “flight box.”

Sherridon Lyons-Verse, an author and church leader from New Life Ministries in South Bend, Indiana, said, “The healing aspect [of the seminar] was much needed. We, as women, keep moving. But sometimes we have to get still and sit down and deal with things, because we don’t want them later to knock us down.”

Lyons-Verse expressed appreciation for the Sister Care manual and intends to work with it for deeper healing and for her ministry among young women.

Ann Jacobs, Mission Network’s Church Relations liaison to African-American congregations, was one of the key organizers of the seminar.

“This event allowed the women to be in touch with themselves,” Jacobs said. “Many participants expressed interest in deepening the connections made during the weekend, and desired to offer similar opportunities for the women within their own ministries.”