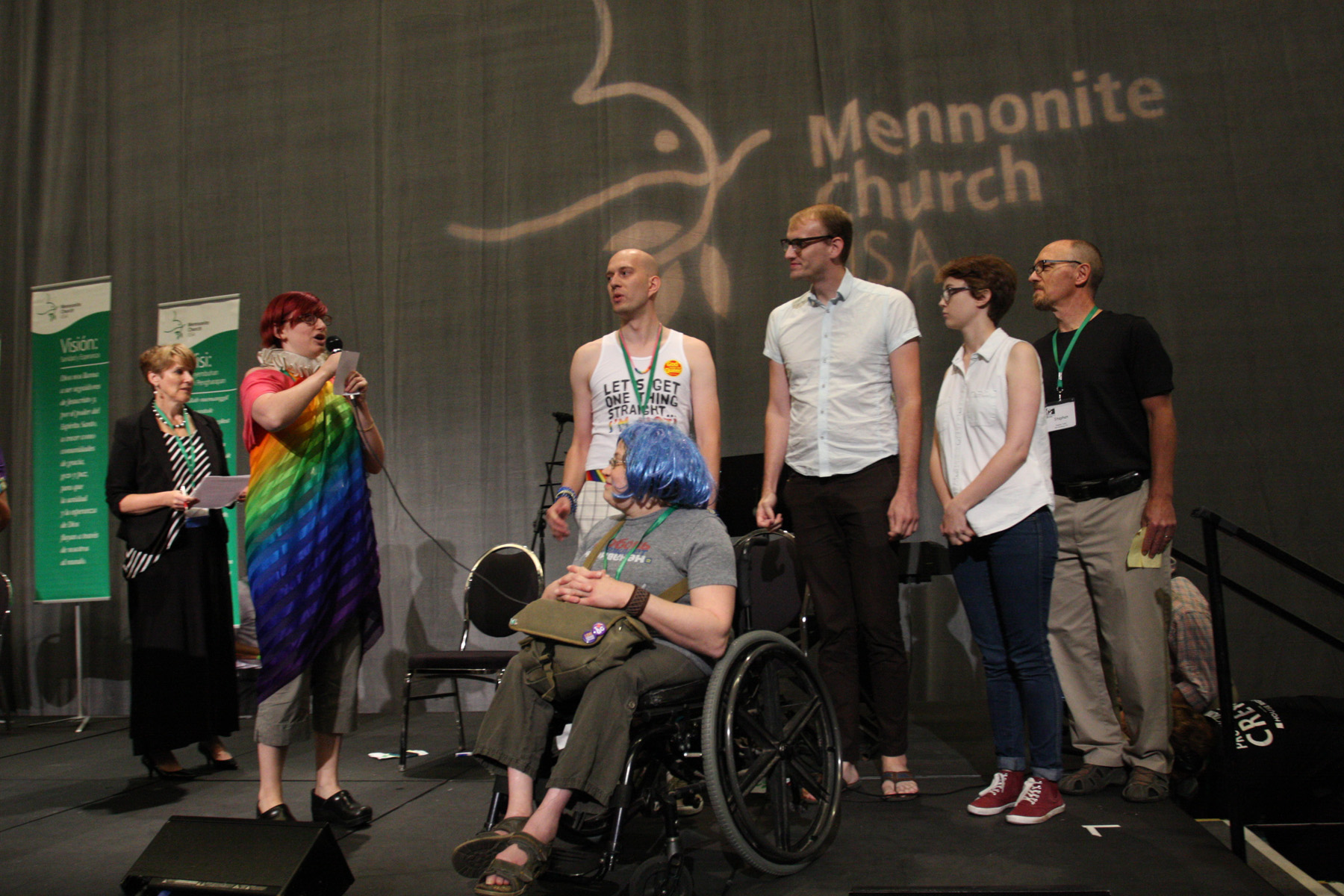 A half a dozen people from Pink Menno during their demonstration at the beginning of the delegate session. Photo by Vada Snider.

Toward the beginning of Thursday’s morning delegate session, a half dozen people from Pink Menno walked to the stage and acted out a parody, announcing, “We heretofore resolve that those struggling with opposite-sex attractions at variance with the Mennonite confession of faith will not be recognized for their membership or ministry in the life of the church.”

Many delegates seemed confused by what was happening. Some in the back yelled that this was not allowed. Others sang. Elizabeth Soto-Albrecht, moderator of Mennonite Church USA, asked that the microphone be turned off. After a few minutes, the group left.

Much of the morning’s session was devoted to discussion of a resolution on forbearance. Megan Ramer, pastor of Chicago Community Mennonite Church, and Charlotte Lehman, pastor of Reba Place Church, Evanston, Ill., introduced it.

Ramer said for her church this resolution did not go far enough, while for Lehman’s congregation it went too far. Nevertheless both said it was important to be together. Lehman said she didn’t want a political debate with bumper sticker statements.

“Conflict is not the enemy,” she said. “We’ve heard the names we call each other … out of our pain and fear.”

She added: “Severing relationships should not be a substitute for learning how to have unity in the midst of our very real diversity.”

After discussion in table groups and at the microphone, delegates voted and passed the resolution, with 581 in favor and 228 against, a 71 percent majority.

In the afternoon, delegates took up discussion of the Resolution on the Status of the Membership Guidelines. Following discussion at tables, many spoke at the microphones, expressing confusion about what the consequences were for passing or not passing this resolution.

They voted, and the resolution passed with a 60 percent majority, with 473 in favor and 310 opposed, while 28 abstained.

For more reporting on the resolutions by Mennonite Church USA, click here.