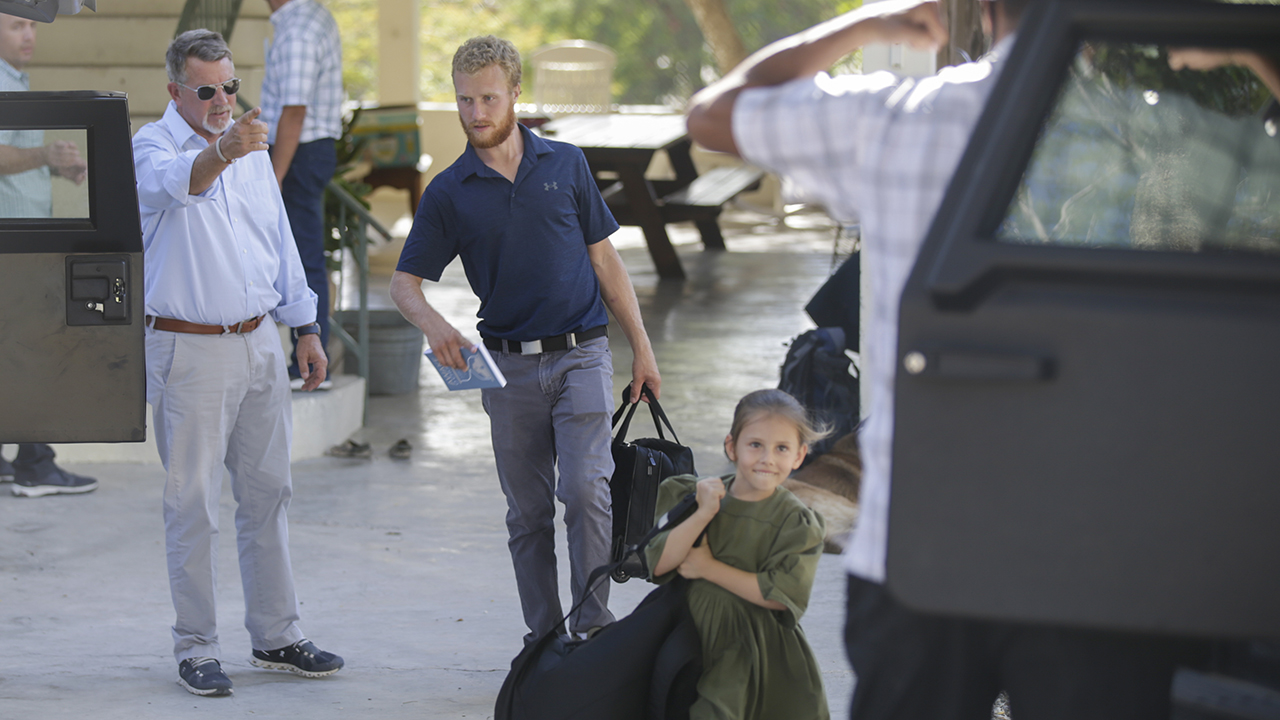 Unidentified people depart on route to the airport from the Christian Aid Ministries headquarters at Titanyen, north of Port-au-Prince, Haiti, Dec. 16. Twelve remaining members of a U.S.-based mission group who were kidnapped two months ago were freed. — Odelyn Joseph/AP

News of the release of the 12 remaining Christian Aid Ministries hostages in Haiti spread quickly Dec. 16 in and around the conservative Anabaptist organization’s Berlin, Ohio, headquarters, and elsewhere.

“It’s an answer to prayer,” Ruth Miller said as she worked at the front desk of the Amish & Mennonite Heritage Center in Berlin.

Many Amish and Mennonite people in the wider Holmes County area volunteer in CAM ministries and donate to it.

Wes Kaufman, who attends a church where some CAM leaders also worship, said many congregations had heeded the organization’s recent request to devote three days to fasting and prayer.

“It’s amazing how God works,” Kaufman said as dined with family in nearby Walnut Creek at Der Dutchman, a restaurant featuring traditional Amish and Mennonite fare.

“We welcomed reports that they are free and getting the care that they need after their ordeal,” she said.

A convoy of at least a dozen vehicles, including U.S. Embassy SUVs and Haitian National Police, brought the group to the Port-au-Prince airport late in the afternoon of Dec. 16 from CAM’s offices in Titanyen, north of the capital.

Earlier, people at the CAM campus could be seen hugging each other and smiling.

CNN reported the hostages — among 17 kidnapped on Oct. 16 by the 400 Mawozo gang — were released in the early morning Dec. 16 in the neighborhood of Morne Cabrit on the outskirts of Port-au-Prince. A source in Haiti’s security forces said the group was found by locals who dropped them off at a police station.

The group flew to the United States later that day on a Coast Guard flight after undergoing medical checks.

CNN reported a U.S. official said a ransom was paid, but not by the U.S. government, for an amount “far less than the original request of $1 million per hostage.”

The kidnapped group included six members of one family from Hart Dunkard Brethren Church in Michigan. The Detroit News reported Cheryl Noecker and five children were among the abducted. Her husband, Ray Noecker, was not kidnapped because he remained behind to prepare a sermon instead of visiting the orphanage.

The congregation’s pastor, Ron Marks, said he did not know what led to the group’s release. The church of about a dozen families did not raise money for a ransom.

“We are rejoicing,” Marks said in a Dec. 16 online video call with media. “A great load is lifted, and we are ready for Christmas. Praise the Lord.”

“The U.S. government has been working tirelessly over the past two months to get them released and get them the medical care and support they need after an ordeal like this,” she said. “Protecting the welfare of Americans overseas and freeing Americans held against their will is a top Biden administration priority.”

CAM general director David N. Troyer said in a Dec. 17 statement that the hostages sang “The angel of the Lord encampeth round about them that fear Him, and delivereth them,” based on Psalm 34:7, many times during their captivity.

“The hostages were able to spend their captivity together as a group. They spent many hours of each day praying, singing, and encouraging each other,” he said. “Unfortunately, they did not have a Bible, but they recited Bible verses by memory among themselves. They prayed for their captors and told them about God’s love and their need to repent.”