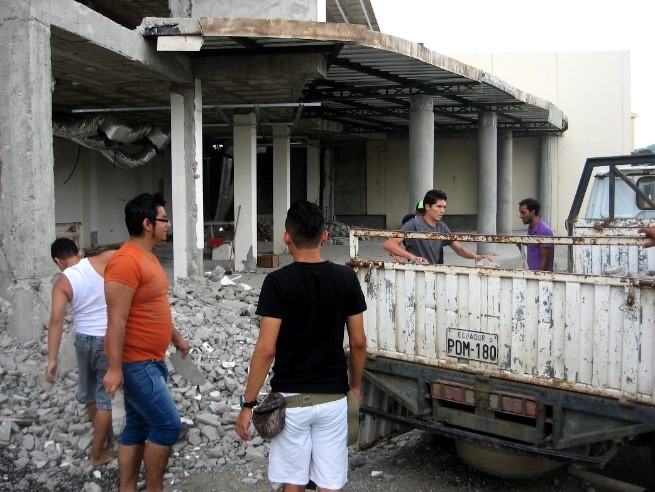 Photo: David Shenk, disaster response coordinator for Mennonite Central Committee, writes, “Youth from Portoviejo church helped clear away rubble that fell from a new church building under construction when the earthquake hit. I was very impressed by the youths’ active involvement in helping out; they seemed to show up at the drop of a hat, ready to help out. I remember one youth in particular, Christian, who pulled his mother out of their house and then went back to the center of Portoviejo at 3:30 a.m., the night of the quake, to help pull people from the rubble before rescue teams arrived. The Portoviejo and Manta churches are organized through small groups around the city, and those groups were able to personally hand out hundreds of food rations to families in need in the first few days.” (Photo by David Shenk)

Members of the Mennonite World Conference (MWC) body are responding to the April earthquakes in Ecuador. A 7.8-magnitude earthquake struck the Pacific coast of northern Ecuador April 16, followed by a second earthquake April 20, and continued strong aftershocks for several days. At least 570 people have been killed and more than 7,000 injured.

Several Iglesia Evangélica Menonita Ecuatoriana (IEME) congregations are located in Manabi Province, an area that was severely damaged by the earthquakes.

IEME requests prayers: damaged infrastructure makes it difficult to distribute supplies and raises concerns about the spread of diseases, and the continuing tremors cause further damage to buildings and emotions.

“We keep trusting that God will help us rise above” says Angel Castro Leon, IEME vice president. “We greatly appreciate your prayers and help.”

Shenk, who is currently from Harrisonburg, Va., is in Manabi Province, which is home to multiple IEME congregations and was severely damaged by the earthquake.has seen buildings teetering on the edge of destruction and houses reduced to rubble by the recent earthquakes. He also has heard about and seen youth working hard to save lives and to clear rubble.

Below, Shenk shares photos and reflections on recovery efforts.

Digna Palma, left, is a member at La Paz church in Manta. She described how she hung onto this door frame during the earthquake while the walls of her house fell around her. Her house is uninhabitable and reduced to rubble. Her family also had suffered through two severe floods over the past 15 years. Jose Tumbaco, right, is pastor of La Paz church.

The center of Portoviejo, which is the city’s and province’s economic hub, was hit very hard. There was about a 61-block area that we walked around where a high percentage of buildings were either destroyed or will need to be demolished. If the earthquake had happened during the week, during the work day, we would almost certainly be talking about thousands of deaths. Luckily, many of the offices, banks, government buildings and businesses were empty at 7 p.m. on Saturday and there weren’t as many people out on the streets, which are normally bustling during the day.

This is what’s left of the home of a Mennonite family in Manta who attend Casa de Oracion Church. In total, we have counted 17 Mennonite families in Manta alone whose homes have been destroyed or damaged to differing degrees. Several families in Portoviejo also have lost homes or businesses. Two Mennonite church buildings in Manta have suffered some minor structural damage.

The road to recovery and rebuilding is long, but people are incredibly resilient, have gigantic faith and are hopeful.