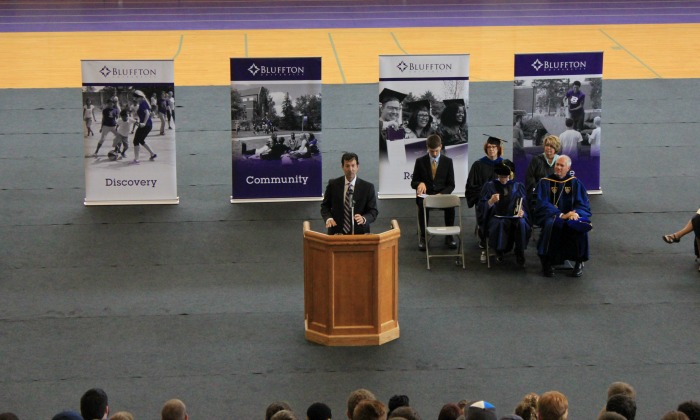 Sometimes it’s the little things we do in life in life that have the most impact. New York Times bestselling author, Nathan Whitaker, shared this message with Bluffton (Ohio) University’s new students during Opening Convocation on Tuesday, Aug. 29.

“I think it’s easy for us to devalue what we do or say. That what we do isn’t going to impact anybody,” explained Whitaker, co-author of “Quiet Strength” the memoir of Super-Bowl winning coach Tony Dungy. The book also served as Bluffton’s summer reading selection for first-year students. “Probably 99 percent of the things I’ve done in life fall into that category. Most of the time my actions have been the stones falling into the pond that nobody sees, but other times there is a ripple effect and our actions do carry on.”

Whitaker’s speech titled “When Integrity Meets Life,” also introduced Bluffton’s 2017-18 Civic Engagement Theme – Integrity, Truth, Virtue: Bluffton’s honor code in the world. 2018 will mark the 100th anniversary of the honor code at Bluffton through which students have been taught to uphold the community of respect in all of their campus interactions. Honor covenants signed by the incoming students were presented during the event.

The covenant begins with the following statement: “As members of the Bluffton University community, we commit to being honest, trustworthy and honorable in our actions and relationships with each other both in and out of the classroom.” The document then describes the honor system. It ends with: “This ideal environment of mutual trust and respect for one another in all aspects of our community life is central to our desire to be a community of respect.” The signed covenants are displayed in Marbeck Center.

With this in mind, Whitaker shared three thoughts on integrity for the students to get the most out of their college career.

First, “Do what we do.” Whitaker explained that this is a favorite phrase of Dungy’s. Whitaker met Dungy while both worked for the Tampa Bay Buccaneers football team. Dungy used the phrase to emphasize to his team that they must be true to their identity and priorities. Just the same, students must be true to themselves to move forward in life. “There’s a saying that 80 percent of success is just showing up,” said Whitaker. “Take care of the small things and do the little things along the way.”

Second, “No Excuses, No Explanations.” Whitaker encouraged students to own their decisions and remember the honor code. “You chose a community that puts relationships and virtue first,” Whitaker said.

Third, “Define Success.” To underscore this point, Whitaker shared a lesson from Dungy’s mentor, Chuck Noll, head coach of the Pittsburgh Steelers for more than 20 years. “Coach Noll would rather his team play well and lose a game than play poorly and win,” explained Whitaker.

It’s a definition of success many would have a hard time coming to terms with, but Noll was defining success for himself. “So often we look to what the world defines as success, but those oftentimes are the temporary things in life, and really it’s the relationships and the lives we build into and being significant in other people’s lives that really matter,” Whitaker said.

Whitaker also shared a story from his college days where he walked-on to the football and baseball teams and majored in English and political science.

During his time at Duke University in Durham, North Carolina, Whitaker joked that the “most eloquent” writing he ever did was painting the words “Duke Loves Jesus” on an overpass on campus. Students were encouraged to paint the area, and as a member of several Christian groups, Whitaker and his friends reluctantly chose the phrase after being unable to come up with a more clever or original saying.

Later, Whitaker attended a Campus Crusade for Christ meeting, a group he didn’t regularly attend because of his academic and athletic schedules. He was tired that night and not really paying attention until an international graduate student spoke about being homesick and the difficulty of taking classes in English. The student had planned to return to Taiwan, “but then he saw the words ‘Duke Loves Jesus,’ and he knew there were other students on campus he could relate to. He just needed to find them and connect with them,” said Whitaker.

“It is impossible to determine which actions in life will make a ripple and which ones won’t,” Whitaker said. “Be mindful of that. Often we never know.”