I’ve often told young college shoppers: don’t just consider how strong the academics are or how good the football team is or even how you like the campus or the town. All of those are good questions, but make sure you also ask: “What do you pay your housekeeping staff?” 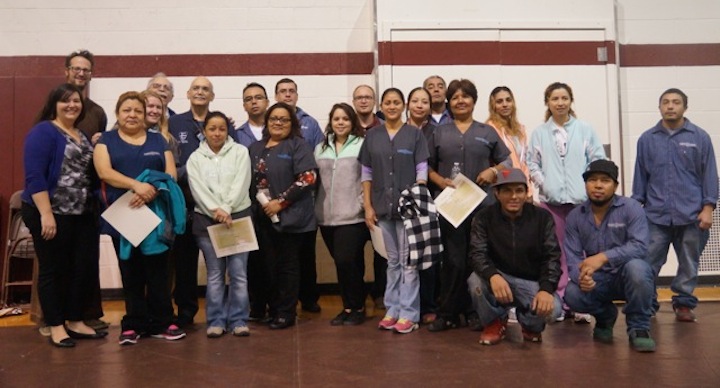 One of the true tests of a good college is how they treat their workers, and certainly a decent indicator of that is how the lowest paid workers fare in contrast to the highest paid administrators. A good question of any college president is if she would be comfortable exchanging salaries for a year with the janitor. After all, both are just as valuable in the eyes of God.

So it was a great privilege this month to be invited to chapel at my alma mater, Eastern University in Philadelphia, for “Housekeeper Appreciation Day.” Celebrating the unsung heroes of the campus is becoming a beloved tradition here, and it is a wonderful one.

In the presence of the president, deans, administrators and hundreds of students and faculty, dozens of campus workers were put in the spotlight and celebrated for their tireless work to keep the campus alive and beautiful. There was a genuine love in the room — hugs, tears and I caught glimpse of a fist-pound or two. Then they were given a certificate of appreciation and a paid vacation day because over 200 students committed to pitch in so they could take off.

It all reminded me of when I graduated from Eastern and moved into North Philadelphia, only to find out that I already knew one of my neighbors. He was one of the housekeeping staff at Eastern. I will never forget the ear-to-ear smile he greeted me with when I first moved in across the street — and the bear hug he gave me.

I hope that every worker on every campus feels as warmly welcomed as I did that day. Twenty years later, we are still friends. This summer, on a hot day, I jumped into the spray of a fire hydrant in the middle of the block with my friend’s aging parents. It was magical. I barely remember (because I’m old now), that our friendship began as I was a “student” and he was “staff” — before we were family. I am proud of how Eastern University continues to think outside the boxes, categories and labels to try and build authentic community.

But community is not easy — it takes intention, time, imagination and vulnerability. And it takes money to pay people a living wage. Justice isn’t cheap. Even now, a new contractor will be coming in to oversee the housekeeping staff at Eastern, and there was a bit of uncertainty, even anxiety, amidst all the joy. But I heard someone say, “Love casts out fear.” And I know that it is true — when we love people well, we cast out the demons of fear, insecurity, loneliness and shame. It’s easier to live without fear when we know that we are loved.

Here’s some homework for you: find out the salary scale for lowest vs. highest salaries in your college, church or organization. My friend Ben Cohen (of Ben and Jerry’s) says it shouldn’t be much more than 6:1 (so if one person makes $10 per hour, no one should make more than $60 per hour). (The average CEO is making 380 times their average worker, meaning the worker needs to work an entire month to earn what the CEO makes in an hour.)

Shane Claiborne is a prominent author, speaker, activist and founding member of the Simple Way. He is one of the compilers of Common Prayer, a resource to unite people in prayer and action. Claiborne is also helping develop a network called Friends Without Borders, which creates opportunities for folks to come together and work together for justice from around the world. This blog post is provided thanks to our partnership with Red Letter Christians.