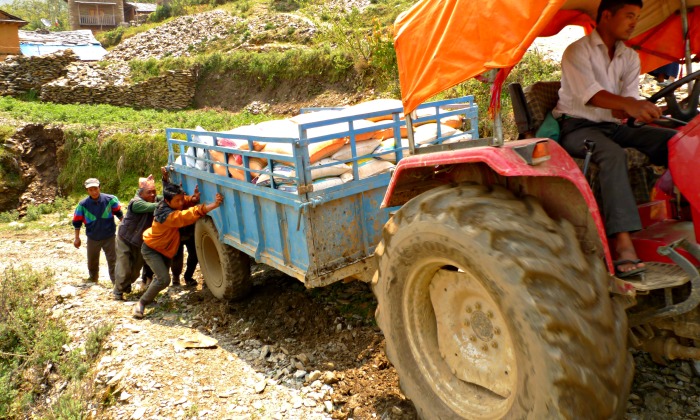 Using tractors and people power to haul supplies where trucks could not go, Mennonite Central Committee’s (MCC) partner organizations finished an initial distribution of emergency supplies to Nepal earthquake survivors on May 12—the same day a second major earthquake rattled the country.

The second earthquake caused further landslides in rural areas and exacerbated damage to buildings already affected by the April 25 earthquake.

In addition to the major quakes, more than 240 smaller quakes and aftershocks also caused damage.

“All areas hit by the first earthquake were affected by the second one,” said Bruce Guenther, MCC’s director of disaster response. “We have already responded in some areas, and continue to provide assistance through our partners in rural and remote areas.”

After the first quake, MCC’s partners delivered food assistance to 2,189 families in the districts of Dhading, Lalitpur and Okhaldhunga. Of those recipients, 789 families also received household items such as tarps, blankets, mattresses, hygiene items, kitchen utensils and flashlights.

Carrying out the distributions was difficult where the remote areas were only accessible by foot or by mountainous dirt roads.

In Darkha, a community in remote northern Dhading, MCC partner Shanti Nepal learned that the food situation was dire soon after the quake.

While Shanti Nepal hurried to prepare a shipment of emergency, ready-to-eat food, a subsequent landslide, triggered by heavy rains in the days after the first quake, blocked the only road that leads into the community. It took more than a week for the road to be cleared so that trunks carrying food relief could get in to the area.

In Okhaldhunga district, getting to the Khijifalate main village after the first earthquake was a 10-hour truck journey, followed by transfer to smaller trucks, followed by a three-hour journey on a road passable only by tractors and motorbikes.

From there, beneficiaries had to carry supplies on foot to their homes in even more distant villages unreachable by motor vehicle. MCC’s partner, Group of Helping Hands, made five tractor trips in two days to get relief supplies from the trucks at the road head.

Guenther and MCC Nepal representatives Leah and Luke Reesor-Keller currently are assessing the situation to determine MCC’s longer-term response. The Reesor-Kellers are from Kitchener, Ont.

To see a map and pictures of MCC’s response, visit mcc.org/stories/mcc-responds-earthquakes-nepal.