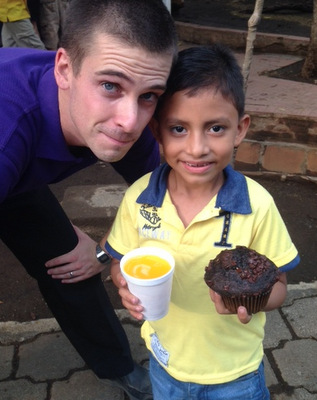 Mitch Yoder, left, and his wife, Lauren Yoder, are long-term volunteers at Fortress of Hope, a home for children like —, pictured.

According to Myron Weaver, the pastor at that time, each family was given $10 to multiply if they could. The $13,000 yield was collected at a harvest offering a few months later.

A large portion went to fund a mission trip to Managua, Nica­ragua, where 35 members helped build a church for a service partner with connections to Maple Grove.

But it was an orphanage they visited as part of the trip that impacted them most deeply.

“It was pretty obvious the kids in the orphanage were not treated the way we felt they should be,” Weaver said. The orphanage was too small and unsanitary, and care was inadequate.

“When you see kids taken advantage of, you want to work and do whatever you can to try to make a difference,” Weaver said.

The group’s desire to help led them down a road that, seven years later, has produced the Fortress of Hope children’s home, generated interest and participation from various Anabaptist congregations and schools, and, most recently, attracted two long-term mission workers.

After the Maple Grove group headed back to Ohio, things happened quickly. At a church meeting to report on the trip, they talked about the orphanage and their dream of opening a children’s home.

“We were able to raise the money just in that meeting there,” Weaver said.

Over the next few months, with various people taking multiple, out-of-pocket trips to Nicaragua, they formed a board, found a former hotel to rent for the home and hired local staff, some from area Mennonite churches.

Then last year, Mitch and Lauren Yoder volunteered to move to Managua long term. They were teaching elementary grades in Harrisonburg, Va., but had always known they wanted to live and serve overseas someday.

Fortress of Hope came to mind because Mitch’s father, Dale Yoder, is on its board of directors. They visited during their spring break in 2014.

“After returning to Harrisonburg, we spent the month of April in prayer and uncertainty because we couldn’t get Fortress of Hope out of our minds,” Mitch said.

“We came back home to Virginia thinking of all the things we could see ourselves doing there, and we couldn’t say ‘no,’ ” Lauren said. They resigned, effective at the end of that school year, lined up jobs and a place to live, and headed to Managua last June.

They help tell Fortress of Hope’s story by maintaining the website, Facebook page and blog. They form relationships with the children and staff, sharing love, teaching them English and leading devotions in the evenings.

“Being here long-term allows us to make deeper relationships with the children and staff of Fortress of Hope, which is invaluable,” Lauren said. “Forming these relationships means sharing more love with each other.”

Through their work they’ve seen lives transformed. Just in the last five months two sets of children returned home after multiple years at Fortress of Hope, because their situations had stabilized.

“It was extremely sad to see them leave, but it was also a reminder that the organization had served its purpose,” Mitch said. “For a significant portion of their childhoods, Fortress of Hope was their family that provided safety, love and told them about God.”

In situations where home life isn’t safe for children, Fortress of Hope has a social worker and psychologist who work with the children — but also the family.

Mitch said three brothers came to the home to get out of an abusive situation.

“The parents went through counseling and rejoined their local church,” Mitch said. “The boys were able to return home after three months, and we regularly saw them at church together as a family.”

The social worker and a full-time administrator are co-directors of Fortress of Hope.

There’s also a custodian and cook. The children live in small houses together, and each has two house mothers who work 24 hours at a time.

The Yoders imagine they’ll stay at least three years but are committed to however God calls.

“Their help has been unbelievable,” Weaver said. “They understand some of the cultural issues we encounter. They model to the kids and to the staff what a good, healthy marriage looks like.”

Many of the children don’t have a father figure, and all the Nicaraguan staff is female.

“For Mitch to come around, that has an impact like I don’t think any of us can realize,” he said.

Lauren said the kids refer to them as “Mama Lauren” and “Papa Mitch.”

Weaver and the other board members help raise funds through an annual golf outing, coming up June 20 in Hartville, and an annual dinner in November.

Right now, funds raised go to running the home, but Weaver has hopes for growth, including owning a building for Fortress of Hope to be in permanently.

“My hope is that the impact we have on kids will make a difference in their lives in adulthood,” Weaver said.

Much support for the home comes from congregations around the U.S. within various Anabaptist groups.

A team from Eastern Mennonite University in Harrisonburg just returned.

Weaver encourages visits. He has been to Nicaragua about 15 times in the seven years since Maple Grove first made the connection. He’s realized how much of an impact the children and staff have on him.