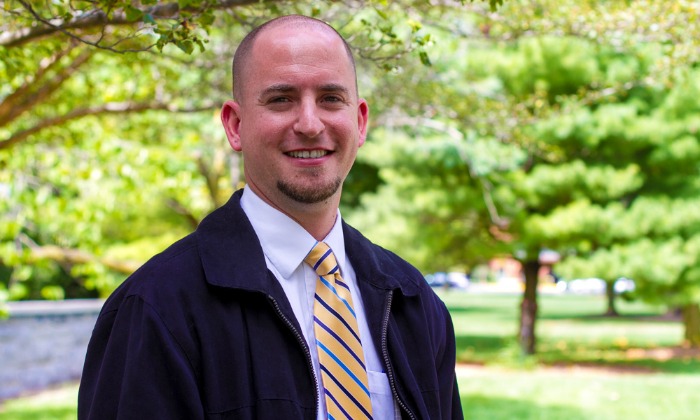 Ryan Keebaugh, assistant professor of music at Eastern Mennonite University, Harrisonburg, Virginia, is one of three winners in the 2017 Raabe Prize for Excellence in Sacred Composition.

Seventy-eight entrants competed for the prize, offered every two years by The Association of Lutheran Church Musicians. Among other guidelines, “preference is given to those entries which grow out of but are not necessarily restricted to, the worshiping assembly of the baptized who gather around Word and Sacrament.”

Keebaugh won honorable mention for his a capella composition “The Suffering Servant,” a meditative tableau on the text of Isaiah 53.

Erik Meyer won the $2,000 prize, which is split between the composer and a musical or ecclesiastical organization of the composer’s choice. Meyer, of Philadelphia, Pennsylvania, is music director at the Church of St. Martin-in-the-Fields, where he oversees a large choral and instrumental program.Honorable mention was also given to Thomas Keesecker of Bel Air, Maryland.

Keebaugh counts this award among the top three of his career, including being a semi-finalist for the American Prize in 2013 and a finalist in the international Iron Composer competition in 2015.

Since the announcement, five people have inquired about performing the work. Among them was a representative from The L.A. Choral Lab, a Los Angeles group which specializes in performing quality new choral works.

“It’s an honor to receive an honorable mention in this contest, which received so many entries,” Keebaugh said. “It was very competitive and I received some beautiful feedback, which I certainly appreciated.”

The selection committee, headed by Dr. Zebulon Highben of Muskingum University, called the work “dense … setting a theologically rich text with tone clusters and long unaccompanied lines in a style that evokes the holy minimalism of Tavener and Pärt. Though it is more difficult than the other two selections, and requires a vocal stamina that would put it beyond the reach of many choirs, it stands clearly in the ‘high art’ stream of the Lutheran musical tradition and is worthy of inclusion as an honorable mention.”

“Ryan is becoming recognized as one of a few leading young American composers,” said Professor Joan Griffing, chair of the EMU Music Department. “His music has a mystical quality that appeals to both performers and audience members alike. We are fortunate to have him on faculty. He is having a positive influence on the next generation of composers who are being ‘grown’ in our backyard.”

“The Suffering Servant” premiered in August 2012, performed by the Bridgewater College Alumni Choir, and has subsequently been performed and recorded by the University of South Florida Chamber Singers and the Western Michigan University Chorale.

Photo: Ryan Keebaugh, assistant professor of music at Eastern Mennonite University, is one of three winners in the 2017 Raabe Prize for Excellence in Sacred Composition for his a capella composition “The Suffering Servant.” (EMU file photo)