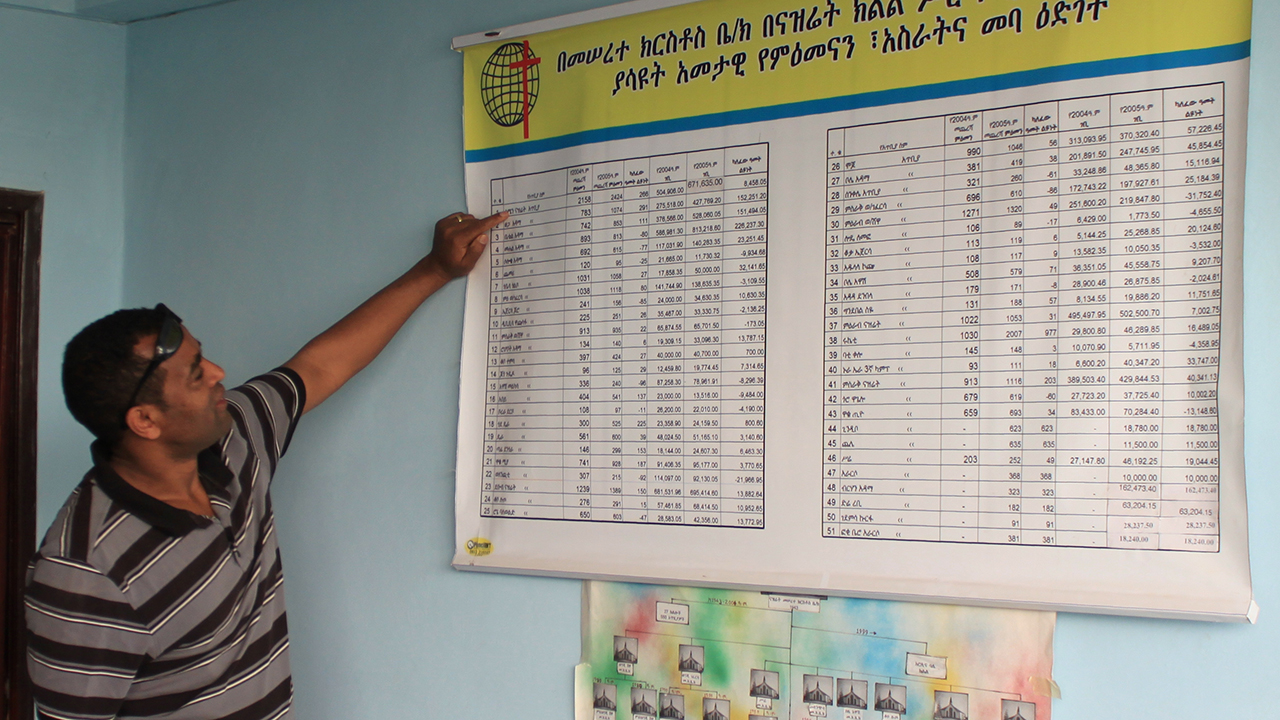 Over Zoom, Norm Dyck shared a photo of a church-planting chart from the Nazareth-Adama region of Ethiopia. At the top was the mother church established in 1948 with the help of Mennonite mission workers.

In the style of a genealogical tree, the chart showed 46 churches birthed from the mother church. What started as a small, missionary movement has grown exponentially.

“Each regional church has a map like this,” said Dyck, Mennonite Church Eastern Canada mission minister, who also serves part-time for Mennonite Church Canada International Witness. “Even individual congregations have maps like this.”

For believers in North America, this growth is staggering. For the MKC, it is intimately tied to a history of persecution and the methods it took to survive.

Out of these practices developed a robust process for nurturing leaders, who were encouraged to plant churches in their neighborhoods and whose gifts were discerned by communities of believers.

Persecution happens to this day in some regions. But the darkest time was during the Derg government from 1974 to 1987, when the military overthrew the government and established communist rule.

MKC went underground, meeting in secret in houses and fields. Women carried Bibles in the folds of their clothing because they were less likely to be searched. Once a group gathered more than 12 households it split up to avoid attention. During this time, the membership increased tenfold.

Fanosie Legesse, intercultural mission minister for Mennonite Church Eastern Canada, grew up in Ethiopia during the communist rule. Groomed to be a communist leader as a teenager, he joined MKC when he was 17.

“As soon as I became a follower of Jesus Christ, it made sense to give everything up and follow him to wherever he led me,” he said.

The rural Ethiopia of his youth was a place without electricity, roads or telephones. For Legesse, the gospel was “literally a light.” He made a commitment to take that light to the surrounding villages. His story is a sample of what many women and men chose to do during the darkest time of persecution.

Legesse became a leader in his local church in Sire in the early 1990s and went on to study at Meserete Kristos College (MKC’s seminary) in Debre Zeit-Bishoftu. He came to Canada in 2003 and returned to Ethiopia with his family as an MC Canada Witness worker from 2007 to 2010. He pastored Zion Mennonite Fellowship in Elmira, Ont., from 2015 to 2019.

Dyck, who visited Ethiopia for the first time in 2015, was struck by the expectations MKC has for new believers. They are assigned a mentor and attend prayer meetings and Bible studies every week for at least two years. The connection with their church family is constant until they mature. It reminded him of the process of catechism in the early church.

The Meserete Kristos Church Women Ministry Coordination Office organized a conference on the role of women in the gospel movement on March 27.

Ninety-nine women from the Addis Ababa region attended the meeting, held at the MKC head office.

MKC President Desalegn Abebe shared the strategic direction of MKC in the coming five years. He said serving Jesus Christ is not a matter of gender but a call from God. God gave gifts to women and men, as parts of the body of Christ, to equip them to fulfill the Great Commission.

He reminded the participants of the role women played when the MKC went underground due to persecution. When the men were unable to move from place to place to serve God’s people, the women continued the ministry courageously. Some who were active in the ministry prayed for the men to have courage to serve without fear.

Participants asked the church to organize similar conferences on issues that matter to women. — Anabaptist World

“There’s a high level of accountability early on in your faith journey,” Dyck said. “It becomes part of the fabric of everything that you do.”

Legesse highlighted the key components of MKC’s leadership development: communal discernment of individuals’ gifts, mentorship by mature believers, regular prayer meetings. But even the term “leadership development” seems like a Western complication of something that in Ethiopia was necessary for survival.

“It was simple, not complicated,” he said. “It was a literal interpretation of the Bible until you hit the wall. Then you would say, ‘I may have made a mistake,’ or you pray or fast about it. You ask forgiveness and correct and continue.”

For Jeanette Hanson, director of international witness for MC Canada, the simplicity of MKC leadership development is inspiring.

“It really comes from a very grassroots level of discipleship,” she said.

MC Canada has a sister-church relationship with MKC. Both churches commit to pray for each other, encourage and learn from each other and share resources in mission: prayer, personnel, teaching and finances.

Financial support from North America provides scholarships for students and short-term teachers at Meserete Kristos College. MKC leaders come to the seminary after they receive training from their local and regional churches, some of which have their own colleges. The local church pays for leaders to study at these colleges and supports the family of the leader while he or she is away studying.

What can North Americans learn from MKC? For Dyck, it’s a realization that the gospel is life-altering and transformative.

“That’s the challenge I keep coming back to in my personal journey,” he said. “I don’t experience that power of transformation within my own faith journey.”

He attributes that to the fact that in Canada there are systems in place that attempt to alleviate the problems Ethiopians still face: poverty, inadequate health care, religious persecution. In Ethiopia, the church does these things.

Prison and peacebuilding ministries are examples, Dyck said, of MKC discipleship in the name of Christ. He believes people witness transformation when they encounter the global church.