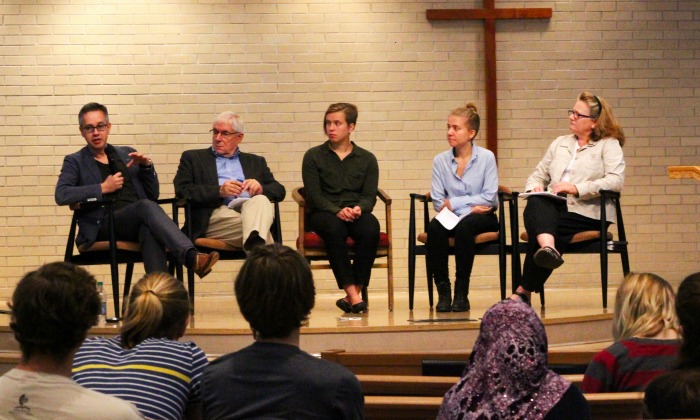 The role of divestment and other strategies in slowing global climate change were front and center for three days at Goshen (Ind.) College when Mark Campanale, founder of the internationally known Carbon Tracker Initiative, visited campus.

The series of events, co-sponsored by Everence, Goshen College and Mennonite Education Agency, kicked off with a keynote address by Campanale on Oct. 2 at College Mennonite Church.

Campanale opened his address by saying, “Do we have enough time to avert catastrophic climate change and, if so, which generation will do it? Now is really the time.” Campanale cited scholarship that showed that the rate of global warming is increasing and that the earth is on track to increase in average temperatures by 2 degrees Celsius by 2031. Scientists widely agree that to avoid untenable climate conditions global mean temperatures should not rise by more than 1.5 degrees C. The Paris Agreement, which will take effect in November, has been ratified by 75 UN countries, including the United States, and outlines strategies to keep the global mean temperature “well below 2 degrees C.”

This visual, created by Ed Hawkins, shows the global temperature change from 1850 until 2016:

Campanale is responsible for the creation of the “unburnable carbon capital markets thesis” and the idea of the “carbon bubble,” ideas he presented to over 100 people in attendance at the Sunday night forum.  The ideas gained prominence when climate change activist Bill McKibben cited them in a 2012 Rolling Stone article, “Global Warming’s Terrifying New Math.”

Campanale and his colleagues note that the current oil reserves held by oil companies exceed the level of fuel that can be consumed to prevent an increase in temperature of over 2 degrees. Therefore, rather than only divestment from fossil fuel companies, Campanale advocates working with powerful stockholders and investment companies to engage in shareholder activism and to pressure large fossil-fuel companies to rethink their business plans for the future and invest in new energy sectors.

The three-day events, which included Campanale’s keynote address, a panel conversation during Goshen College’s Oct. 3 convocation and Campanale visiting several classes, came about in response to student activism calling on MEA and Everence to divest from fossil-fuel companies.

In February, members of the GC Divest and Divest EMU (at Eastern Mennonite University, Harrisonburg, Va.) student groups wrote a letter calling on their colleges, whose investments are managed through MEA’s joint investment pool, to divest from fossil-fuel companies. The letter states, “MEA prefers to deal with fossil-fuel and mineral-extraction companies through shareholder advocacy, whereby shareholders use the leverage that comes with owning stock to work for social and environmental objectives within the company. While shareholder advocacy has been effective in some contexts, it is not an ethically appropriate model for challenging fossil fuel or mineral extraction companies.”

The students cited both concerns about climate change and the ways fossil-fuel and mineral-extraction companies impact developing countries.

Lapp Stoltzfus and Yoder have met with the MEA investment committee on several occasions.

“The goal of this event was to bring different voices in to help us all explore our current realities,” said Mark Regier, Director of Stewardship Investing for Everence Financial. “We can’t look at binary choices to solve complex problems. How do we get where we want to be and how can we be most effective? Those are the questions we want to think about together. We see students as very important partners in this conversation.”

In addition, Everence, who partners with MEA’s investment committee to manage the college pool, also has a full-time staff person devoted to shareholder advocacy. Chris Meyer, manager of stewardship investing advocacy and research for Everence Financial, notes that Everence has had some success with shareholder advocacy. He cited negotiations with the Norwegian company, Statoil, where Everence joined shareholder petitions that resulted in the company abandoning a new oil sand drilling project in Canada and starting a new business unit to work on renewable energy.

“We want to engage companies in planning for long-range scenarios,” said Meyer. “We’re asking, What is your business plan for 2030 if you plan to support emissions curbs?”

On Oct. 3, 40 Goshen College students, Everence representatives and Campanale met to hear about the literature review produced by Lapp Stoltzfus and Yoder. There was also time for Campanale and others to ask questions and give feedback. Lapp Stoltzfus and Yoder, with other members of GC Divest, will work on revising the recommendations and continue to be in conversation with MEA’s investment committee.

“Climate change is a huge social justice issue,” wrote Lapp Stoltzfus in an Oct. 6 email. “It is also connected with concerns of environmental destruction and financial risks. The motives for conversations about Goshen’s endowment are twofold: to use a financial lens to push the urgency of climate change and the need for dramatic, creative, commitment to systemic changes, and advocating for forward-thinking investment practices that can safeguard the college against increasing financial burdens  in the long-run as climate change accelerates.”