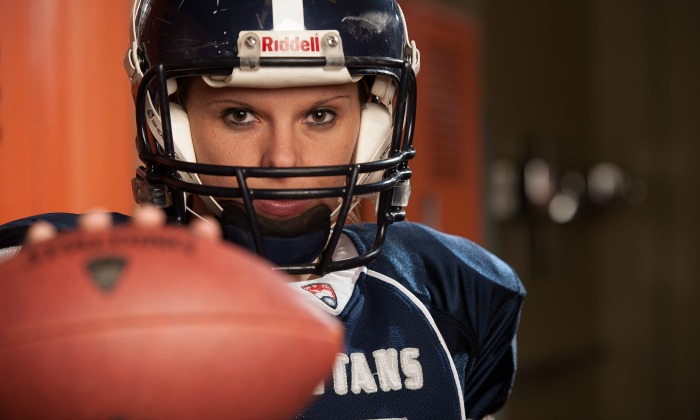 Photo: Katie Sowers, a graduate of Hesston (Kansas) College and Goshen (Ind.) College, during her time playing quarterback for the Kansas City Titans, one of 45 teams in the Women’s Football Alliance. Photo by Larry Bartel/Hesston College.

Katie Sowers is making history. In accepting a position as an offensive assistant coach with the San Francisco 49ers, Sowers is primed to become only the second woman in the National Football League’s history to hold a full-time assistant coaching position throughout the NFL season. Sowers is a 2009 graduate of Goshen (Indiana) College and a 2006 graduate of Hesston (Kansas) College.

Sowers has family in Kansas City and was simply planning to move back home following the game. Instead she packed up a car and headed back to the West Coast for a season-long stay in San Francisco when she found out her fellow coaches’ efforts to land her a full-time position had paid off.

When she first heard the news, Sowers says she was excited yet also aware that lots of unknowns still lie ahead.

“With this position comes a lot of attention, and I’m not huge on being in the spotlight, but it comes with the position,” she said in an Aug. 18 interview.

Sowers also knows that having some press exposure also brings with it the ability to make a difference.

“Growing up, I would have loved to see a female in this position, because I always just thought it couldn’t happen,” said Sowers, who notes that she’s loved playing and watching football since she was a little girl. “I’m up to the challenge. My goal and my hope for women is that when I am in conversation with someone or I’m asking a bunch of young kids what they want to do when they grow up, it’s not odd or weird for a girl or a woman to say she wants to be a football coach. The more normal that can be, the better we’re going to be as an organization.”

Sowers says her time at both Hesston and Goshen prepared her for the work she’s doing now. She cites Hesston’s motto, “Start here, go everywhere,” as a perfect illustration of her journey to this new coaching gig.

She also remembers feeling overwhelmed when she was first starting out by the sometimes negative culture that competition can foster in the NFL.

“I remember talking to my mom [Hesston College faculty member Bonnie Sowers] and feeling refreshed. I realized that I can positively change things that maybe I don’t like,” said Katie. “I’ve been thinking about that Hesston College experience: smiling when you see people you’re walking by, being friendly and being open. It’s about being what both schools embody in their students and bringing a positive light to wherever I am.”