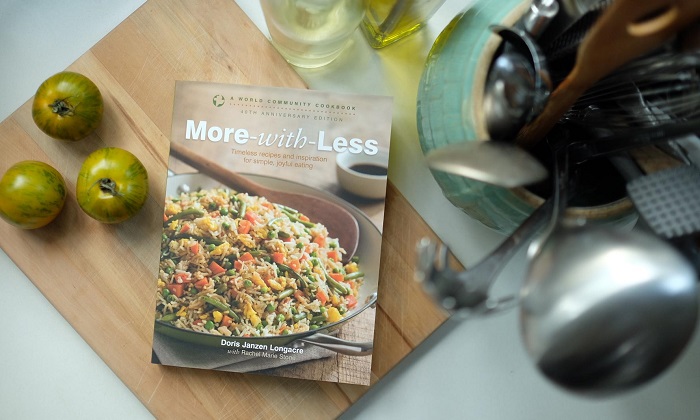 How do you update the holy grail of thrifty and thoughtful cooking? Doris Janzen Longacre’s More-with-Less cookbook, compiled from hundreds of recipes submitted by Mennonite cooks around the world, has almost a million copies in print. But it is four decades old.

Leanne Brown, author of a cookbook titled Good and Cheap, was asked to write a foreword for the 2016 edition of More-with-Less. She suddenly realized the request brought to mind a sacred space in her own mother’s kitchen.

“This was the book my mother kept on the kitchen shelf,” Brown writes in the foreword to More-with-Less. “The kitchen shelf was sacred. Small and rickety as that shelf was, only that which was always in use deserved that hallowed spot. Seriously, you want me to write the new foreword for my mom’s kitchen shelf book? Sign. Me. Up.”

Food writer Rachel Marie Stone, author of Eat with Joy: Redeeming God’s Gift of Food, was contracted to update and edit the 2016 edition of More-with-Less. The first edition launched before she was even born. Those of Brown’s and Stone’s generations think of More-with-Less as much more than a cookbook; they see it as a movement that now includes such terms as “slow food,” “locally sourced,” “hundred-mile diet,” “meatless Mondays,” and more.

The beginnings for the original cookbook were humble. Two families—including Doris and Paul Longacre—gathered around a picnic table and discussed global hunger and the world food crisis of

1974. The nonprofit Mennonite Central Committee (MCC) had asked constituents to examine their own food habits, and challenged people to “eat and spend 10 percent less—both as an act of voluntary simplicity in solidarity with people who were poor, and as a practical move toward actually consuming less of the world’s limited resource,” writes Longacre in the book’s original preface.

Stones’s research for the new edition included a visit to Mennonite Central Committee U.S. headquarters in Akron, Pennsylvania, where she devoured Longacre’s original notes in a file on possible names for the book, along with an afterthought scribbling of the phrase “More-with-Less.”

Stone also writes of Longacre’s death from cancer just three years after More-with-Less was first published, when she was 39.

“She could not have known that eating locally and seasonally would become a mark of hipness, and that many people would begin to spend more time watching cooking shows than actually cooking,” reflects Stone. The book champions “simple food, well prepared from whole, fresh ingredients, eaten with gratitude,” she writes.

New features include a new size, lay-flat binding, some new recipes containing fresh and healthy ingredients, updated nutritional information and expanded cooking techniques. The recipes also include labels indicating vegetarian or gluten-free. Stone worked with an advisory group that included a dietitian, representatives from MCC and

Ten Thousand Villages and other cookbook users. Fans of More-with-Less helped choose which recipes to include through an online survey conducted in spring 2015.

Filled with colorful pictures of people and food from around the world, as well as recipe photos, the new volume still includes much of Longacre’s writings, including chapters on the idea of having less with more, making changes as an act of faith, tips on building a simpler diet, and eating with joy.

Theologian Malinda Berry, who also grew up eating many dishes from More-with-Less, says that “Longacre’s voice resonates with prophetic witness and pastoral concern for her neighbors both in North America and around the world.”

Longacre was also the author of Living More with Less, which her husband Paul completed during and after Longacre’s 31-month battle with cancer.

More-with-Less and the entire World Community Cookbook series is commissioned by Mennonite Central Committee, a worldwide relief, development and peacebuilding ministry of Anabaptist

churches. All royalties benefit the work of MCC.

The new edition is available from www.mennomedia.org or 1‑800‑245‑7894, as well as Amazon and other online and local bookstores.