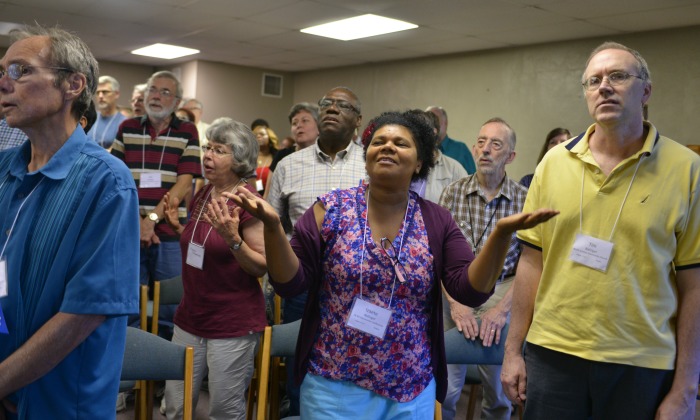 During their annual sessions June 15-17 at Amigo Centre, Sturgis, Michigan, Indiana-Michigan Mennonite Conference (IMMC) delegates voted to affirm “Renewing a Vision,” a document that offers a new path forward for the conference’s life together and a statement on how the conference will live into the “breadth of [theological] variance” among conference congregations.

The statement passed with a vote of 78 percent in favor and 22 percent against. The vision statement needed a simple majority in order to move forward.

Conference leaders said they were encouraged by the vote and the care delegates showed one another, even across disagreements.

“We have been working for a number of years at increasing our capacity to talk about things that matter and things that are sometimes difficult to talk about,” said Dan Miller, IMMC conference minister, in a June 21 interview with conference leaders. “And I was really, really impressed with the way the delegates interacted. There was a great amount of sensitivity.”

“The Spirit’s work during this weekend was indescribable,” said Paula Killough, IMMC moderator. “So much of what happened was not planned by humans.”

agreements. As part of this process, congregations and credentialed leaders who want to be part of Indiana-Michigan Conference will be asked to sign a covenant agreement every three years.

The document states, “The covenant asks us to commit to engaging the shared spiritual practices,

participate in conference affairs (via volunteers, delegates, finances, prayers and communications), use the communal discernment process as needed and foster intercongregational relationships.”

The vision statement makes it clear the conference wants to center its life together on the central belief that “Jesus Christ is Lord and Savior” and lists six shared spiritual practices that congregations and conference leaders are invited to engage: corporate worship; prayer, fasting and generous giving; weekly Bible study in congregations; accepting and offering hospitality; regular Bible study with “neighbors and strangers”; and practicing peacemaking by “extending lovingkindness and forgiveness” to others.

In addition, the covenant asks conference members to agree on a communal model for discernment when congregations are testing faith practices or changes in belief that are different from those currently held by the conference and Mennonite Church USA.

The discernment process invites congregations considering moving toward a position at variance with the conference’s current understandings to engage in regular study and conversation with a sister congregation in the conference.

In addition to the discernment process, the statement includes a note about the “breadth of variance” in theological understandings across the conference, citing the specific example of the inclusion of LGBTQ people in congregations and in leadership roles. The statement says, “Because we have been unable, as a conference or as a denomination, to decide on a stable and consistent understanding of LGBT inclusion, we hope that more stable and consistent understandings can occur within individual congregations as we strengthen our relationships with our God, one another and our communities.”

The breadth-of-variance statement also clarifies the conference’s response to several scenarios, specifying that

During the Friday worshipful work session, delegates had the chance to hear impromptu sharing from Amos Muhagachi, a bishop from Kanisa la Mennonite Tanzania (KMT, the Tanzanian Mennonite Church) who is studying at Anabaptist Mennonite Biblical Seminary in Elkhart, Indiana. Members of Indiana-Michigan Mennonite Conference were part of the team that accompanied leaders in Tanzania as they first began the KMT. Muhagachi told the delegates their churches in Tanzania have been praying for the conference for many years.

Muhagachi encouraged the delegates, sharing stories of a recent conflict faced by the KMT in discussions about military action, politics and understandings of marriage and polygamy, theological disagreements that threatened to divide their national fellowship.  Muhagachi noted that church members have prayed and studied together and are remaining together even in disagreement. He encouraged IMMC delegates to do the same.

“One of the things that touched the delegates is that KMT has been praying for us for a number of years already, even before we knew we needed it,” said Miller. “I had one person come up to me in tears afterward. It was so meaningful to them.”

The way is made by walking

The theme for the weekend’s worship and work was “The Way is Made by Walking,” drawing on

Scripture from Micah 6 and the story of the encounter with Jesus on the road to Emmaus from Luke 24.

Karla Minter, Mennonite Mission Network church relations associate and a former member of an IMMC congregation, preached on Friday and shared important words about adaptive change, living in the uncomfortable middle and continuing to move forward, even when some details are unclear.

And just as the theme suggests, conference leaders know there is work that still lies ahead to implement and live into this vision. The Missional Leadership Team, the group responsible for developing and testing the “Renewing a Vision” document, will meet in August to process feedback and comments from delegates, and, later in the fall, conference commissions and pastors will meet as well.

“As the MLT, we need the wisdom of others as we take these next steps. We can’t see the whole thing ourselves,” said Miller. “Some of these meetings in the fall are really opportunities for us to benefit from the wisdom of each other as we work to implement this.”

The vote also brings with it the potential of more loss. When the results of the vote were announced, Killough reminded delegates that this was not a time for celebration for whoever “won.”

“This is not a significant time for celebration because it also comes with more loss, and we know that,” she said. “We know that some congregations will now take up discerning whether or not to leave, based on the vote and the adoption of the vision. But for us as leaders of the conference and for those who choose to be covenanting members of this community, we have a way forward, which we have really not had for quite a long time.”

Bob Yoder, moderator elect and former chair of the MLT, agrees and cited the wisdom received from delegates during the assembly, “One of the words that stuck out to me during our open mic time came from a person who had lived in Oregon, where fog is really thick,” he said on June 21. “She sees ‘Renewing the Vision’ as a good next step. In fog, you don’t want to stop. You have to keep moving one step at a time. In that regard, I’m glad it passed, and it was a step forward. It might seem that we are still in a fog, and that’s OK.”