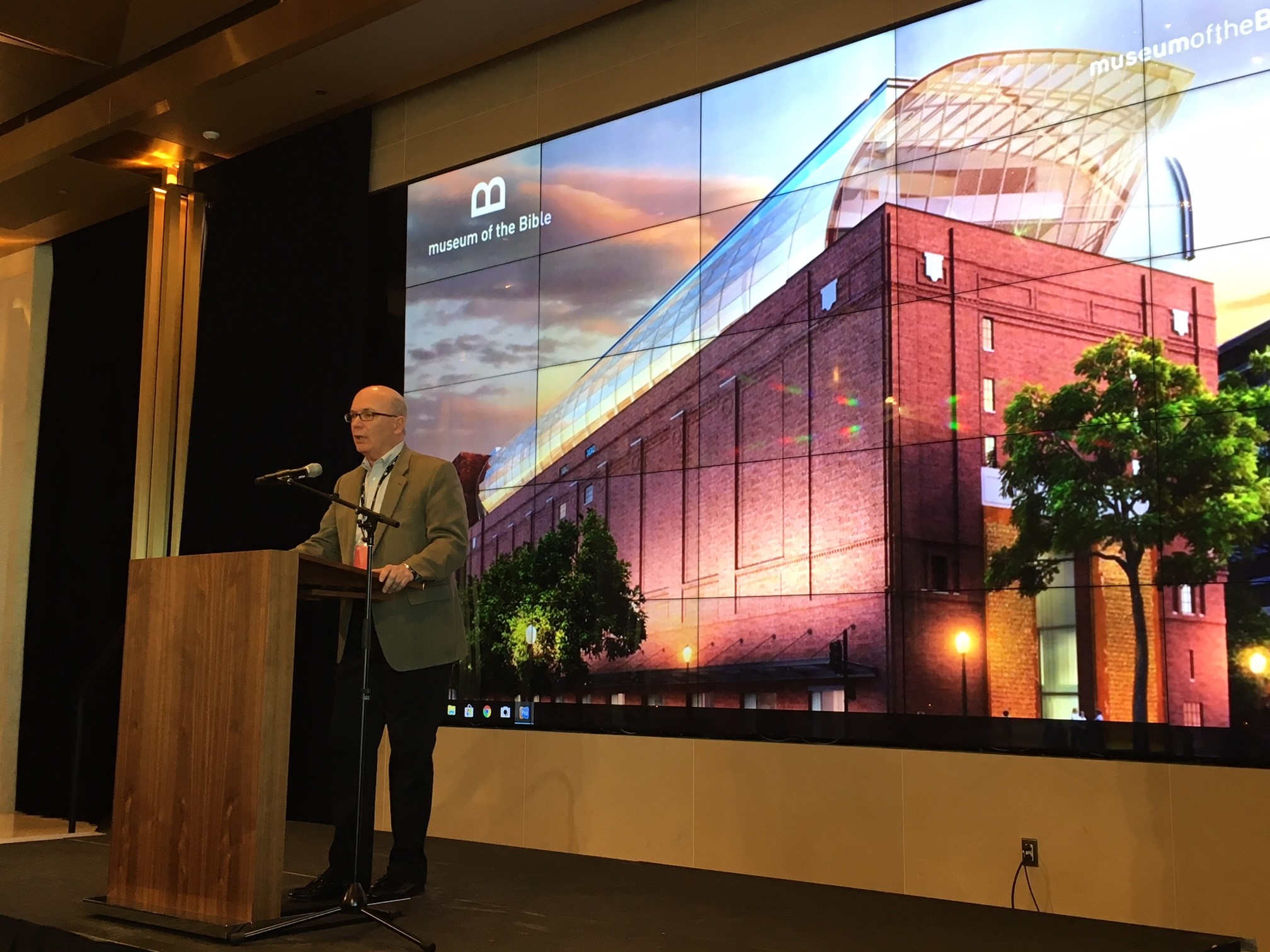 Photo: Barth Hague speaks during a Nov. 11 event in honor of Joel Kauffmann at the Museum of the Bible, Washington, D.C. Photo provided.

Six days before the Museum of the Bible opened its doors, more than 100 friends and family of Joel Kauffmann, a cartoonist and creative consultant on museum design prior to his death in 2015, gathered at the Washington, D.C., facility to remember Kauffmann, celebrate his contributions and launch a new scholarship in his name.

The museum, a 430,000-square-foot look at the Bible’s history, stories and impact located just blocks from the National Mall, opened to the public on Nov. 11. The project is privately funded and, according to NPR, was “largely the brainchild” of Steve Green, CEO of Hobby Lobby. The stated mission of the museum is to “engage people with the Bible.”

Kauffmann, a screenwriter and creator of the Pontius Puddle cartoon published in more than 200

publications, including The Mennonite, died suddenly on May 8, 2015. For him, the project represented the convergence of his personal passion for the Bible and his experience with building exhibits, perhaps most prominently at Nazareth Village, an open-air, interactive museum in Israel that replicates village life in the time of Jesus. He was invited into the project by Cary Summers, the museum president and someone Kauffmann had previously collaborated with. Summers shared with attendees at the Nov. 11 event that after he was hired onto the project, Kauffmann was his first calls.

At the Nov. 11 event for family and friends, museum staff unveiled a plaque thanking Kauffmann for the “creative genius he brought to the Museum of the Bible.”

“In the welcome that I gave people, I noted that Joel really was excited about this museum,” said Nancy Kauffmann, Joel’s wife. “When he would wake up, there would be some days that he just said, ‘I can’t believe I get to work on something like this.’ The project brought together a number of experiences from his work at MennoHof [an Anabaptist history museum in Shipshewana, Indiana], Nazareth Village and his work in film. He always had an interest in how you tell the story, and he was looking forward to Nov. 17, 2017.”

After Joel’s 2015 memorial service, Nancy told Ron Byler and Barth Hague, friends of Joel, that she

wanted to find a way to honor Joel’s creative legacy, at the museum and beyond. Hague and Byler followed up on this idea and explored a variety of options before settling on the concept of launching the Joel Kauffmann Scholarship: Engaging the Creative Edge of Faith. The scholarship will be given annually to a student interested in communication arts at Goshen (Indiana) College to encourage “creative imagination in nurturing faith.” They also wanted to hold a celebration to honor Kauffmann’s work, especially on the new museum.

“It was important for us to gather at kind of a sacred place to help Joel complete this work,” says Hague. “The last couple of years have been pretty raw years. We needed to have a celebration.”

Attendees at the Nov. 11 event shared a meal during a program where they learned about the scholarship and were invited to contribute. After the program, attendees got a chance to preview the museum’s exhibits. Friends saw Joel’s fingerprints in a variety of places, including an exhibit that drew on the format of Nazareth Village, a display featuring his comic strip character, Pontius, and Joel’s advocacy to make sure the stories of biblical women were included in exhibits.

“In a lot of ways those of us who know Joel and have worked around him know that this project ended with a level of integrity that would not have been there had Joel not been involved,” said Hague.

“Joel used every avenue of communication he could,” says Nancy. “He was finding ways of expressing faith by using everything as a tool, from graphic design to music to film to writing to curriculum, and we want to keep encouraging that work at the ‘creative edge of faith.’ It means a lot to me.”

Donations are currently being accepted to support the scholarship fund, which will be administered by Goshen College. Planners hope to raise $100,000 for the fund and are halfway to meeting that goal.