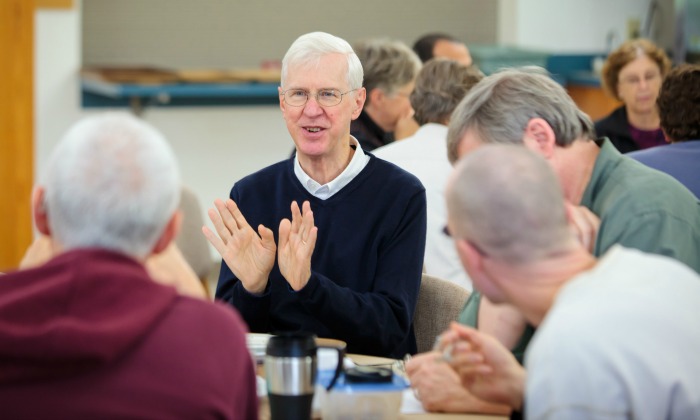 Former mission worker, scholar and speaker, Alan Kreider, was known for his mentoring spirit that ignited contemporary Anabaptism in the United Kingdom (UK) and beyond.

Alan Fetter Kreider was born Nov. 8, 1941, to Carl and Evelyn (Burkholder) Kreider. Tributes and testimonials in honor of Kreider, professor emeritus of church history and mission at Anabaptist Mennonite Biblical Seminary in Elkhart, Indiana, have been pouring in via the seminary’s Facebook page and alumni Facebook group since Kreider’s death on May 8, 2017. Kreider, 75, died peacefully in the presence of his family at his home in Goshen, Indiana, after having been diagnosed with multiple myeloma in December 2016.

Qualities emerging consistently in comments honoring Kreider include his deep joy and irrepressible enthusiasm, hope-filled faith, warmth, gentleness, generosity, thoughtfulness, patience, humility and humor. To many who wrote to share their condolences and reflections, Kreider embodied hospitality and welcome, attentiveness and genuine concern for others as he shared his love for Jesus.

“Alan was an excellent, rigorous scholar, bubbling over with research interests even in his last weeks,” noted Rachel Miller Jacobs, AMBS assistant professor of congregational formation, who met weekly with Kreider and others in the AMBS community for intercessory prayer. “His thoughtful writing, generous mentoring and spirited teaching enriched countless people. Yet what is most striking about him is not so much his achievements (though they are considerable) but the way he inhabited them, with a winsome combination of curiosity, humility, joy, creative energy and love of God and of the church.”

“These words utterly fail to capture what a gift Alan was to so many, and the deep hole his death leaves in our hearts,” she added.

A 1962 graduate of Goshen (Indiana) College, Kreider returned to teach history there after earning his PhD in English history at Harvard University, Boston.

Alan Kreider married Eleanor Graber Nase on June 19, 1965, and the couple moved to London, where Alan did research for his PhD. During this time, they lived in the London Mennonite Centre, run by workers of Mennonite Board of Missions, a predecessor agency of Mennonite Mission Network.

In 1968, the Kreiders returned to Goshen for four years before venturing again to London for more research. Instead of returning to live at the London Mennonite Centre, the couple decided to reside in St. Albans, outside of the small Mennonite community. The friendships they formed gave a new perspective and appreciation for English life.

A call to ministry

The Kreiders began to discern a call to mission work after being approached by Wilbert Shenk, then

overseas director for Mennonite Board of Missions. In 1974, the Kreiders shifted their focus from academics to mission work and agreed to serve at the London Mennonite Centre. For the next 16 years Alan and Eleanor gave leadership of the Centre together.

They were among the first Mennonites living in the UK in 400 years. They arrived with two books in hand: John Howard Yoder’s Politics of Jesus and the More with Less cookbook. While the former helped explain Anabaptist theology, the latter provided concrete ways to live that out.

Over the next years, Kreider learned to “lean on the Lord” as he called it, and rely on God’s strength. He was a rigorous scholar in history, but had little formal training in mission or theology. As Kreider continually followed God outside of his academic comfort zone, he proved to be a lifelong scholar, and learned mission and theology through self-study and practice.

With increasing measure, Alan (and later, together with Eleanor) was invited to speak publically. As the Falklands War of 1982 began, debates on war, peace, and Christian discipleship were especially relevant. And the uniqueness of an Anabaptist voice gave Kreider the opportunity to debate the arms race with Sir Neil Cameron, the former Chief of the Defense Staff and Marshal of the Royal Air Force.

In both public speech and private conversations, the Kreiders focused on the radical good news, and its social, political and economic effects. This new emphasis on living out faith built ecumenical bridges and opened hearts to Anabaptism—in an increasingly post-Christian context.

The Mennonite Centre became a space for hospitality, worship and a springboard for Anabaptist thought and practice. During their time there, the London Mennonite Centre developed into a community house that lived, ate and worshiped together. The small but growing Anabaptist community occasionally worshiped at entrances to military bases. This was both a public witness and an alternative way of living out faith. With an increasing spotlight on Anabaptist living in the UK, Kreider developed an Anabaptist resource center with a library and weekend workshops to discuss alternative ways to follow Jesus. A Radical Reformation study group also formed, gathering a number of local theologians to discuss Anabaptist thought and practice.

All of these things led to the development of the Anabaptist Network, founded with the Kreiders’ guidance. This was further confirmation of Alan and Eleanor’s call to mission work.

In the early 1990s, the Kreiders’ influence continued to spread through the United Kingdom. A book co-authored by Alan Kreider and Stuart Murray Williams called Coming Home (2000) shared stories of 60 contemporary Christians—all influenced by Kreider’s Anabaptist teaching and modeling.

“What has happened in the last 30 years or so is that the Anabaptist voice has begun to sing again,” said Stuart Murray Williams, a subsequent leader in the Anabaptist Network. “For us, Anabaptism is about mission. It is about engaging a post-Christian culture in prophetic issues. … It is a movement of renewal.”

In addition to speaking in the UK, Alan and Eleanor were invited to speak at the 1997 Mennonite World Conference Assembly in India. Their joint sermon, much like their shared ministry, inspired people around the world to seek greater shalom both locally and globally.

“Alan was distinguished by a deep and abiding passion for God’s mission that was marked by a sincere thoughtfulness, a profound ecumenicity of spirit, and a gentle and kindly hospitality in his engagement with others,” said Stanley W. Green, executive director for Mennonite Mission Network. “His love for God and commitment to God’s purposes in the world, together with the largeness of his sensitivities, ensured that a large circle of friends all around the world experienced a great sense of loss upon the news of Alan’s home-going. He will be missed and long remembered.”

More in-depth information about the Kreiders’ ministry can be found in the book, Forming Christian Habits in Post-Christendom: The Legacy of Alan and Eleanor Kreider, by James R. Krabill and Stuart Murray.

Kreider was raised in a family that deeply valued academics.

“It was never clear whether Alan was a ‘missional historian’ or a ‘historian-missiologist’ … and that was part of his inspiring genius. Alan held so many important themes together and did so with a mesmerizing mixture of scholarly integrity and passionate faith,” said James Krabill, a senior mission advocate at Mennonite Mission Network. Throughout Kreider’s time in England as a mission worker, he taught courses on theology and history at the University of Manchester, and Regent’s Park College, Oxford. Alan and Eleanor together taught and preached at conferences and colleges throughout the UK and in Europe.

In 2000, after concluding a quarter-century of mission work in the UK, Alan and Eleanor Kreider settled in Elkhart, Indiana, and became traveling mission educators for Mission Network until 2004. During this time, alan was a guest lecturer around the globe in France, Australia, Japan, Indonesia, New Zealand and Israel. Kreider also taught occasional courses at AMBS. In 2004, he joined AMBS’s teaching faculty as half-time professor of church history and mission. Even after retirement in 2009, he continued to teach occasional AMBS courses and independent studies while also pursuing his interests in research and writing.

According to AMBS Dean Rebecca Slough, the AMBS community benefited greatly from Kreider’s wealth of experience as a teacher in settings across the world as well as a missionary, preacher, scholar and host.

“His intellectual pursuits were interwoven with his ministry — looking to what the church needs to hear or recover from its past for the sake of its present mission,” she said, noting that while it is common in scholarship to define and focus on one specialty, Kreider’s interests ranged widely.

Kreider’s former students testify to the profound impact that he had on their lives — personally, spiritually and professionally.

Joe Sawatzky (MDiv 2005) of Goshen, church relations representative with Mission Network and a former mission worker in South Africa, wrote on Facebook, “Anna and I left AMBS for our assignment in South Africa in 2005, full of Alan’s teachings. I didn’t take along many books, but The Change of Conversion and Worship and Evangelism in Pre-Christendom made the cut. When I had to pull together a teaching on the History of Christianity, I realized how much of my thinking was shaped by concepts I learned through Alan. … I think of Alan as something of an ‘Abraham’ who left his home and kindred and worshiped wherever he went, and in so doing became a blessing to the nations.”

Joanne Gallardo (MDiv 2010), a mental health case manager in Washington, D.C., shared, “I’ve always been wary of the concept of ‘mission,’ so it was with some suspicion and trepidation that I took a course with Alan in 2008. I was completely blown away. He turned my traditional view of mission upside down and helped me understand the true concept of ‘church’ and ecclesiastical responsibility. ‘God, what are you doing, and how can I help?’ is a question I have taken to heart ever since that first class, and the many from him that followed.”

An avid learner and lecturer, Kreider was also author of numerous books.

Equipping the next generation of Anabaptists

“[The Kreiders’] intellectual rigor, lively faith, love for people, and willingness to be available for conversation had a big impact,” said Tim Foley, Mennonite Mission Network’s Europe director, who was also introduced to Anabaptism through the Kreiders. “Alan and Ellie (Eleanor) were friends and mentors to countless people.”

As a mentor, Joanna Shenk appreciated Kreider’s compassionate listening. “While in seminary, I was doing the work of becoming an adult and asking a lot of difficult questions about my upbringing,” she said. “I was wrestling with what I wanted to hold on to and what I wanted to let go. I was wrestling with what was true for me as a follower of Jesus. He walked with me through this intense and confusing time. He honored my questions and did not seek to give answers. He helped me reflect on the gifts I had been given by my family, while also seeing the importance of telling my own story.”

Like many of Kreider’s mentees, Shenk went on to pastor and inspire others to live in a radically Anabaptist way.

Funeral services will be held Tuesday, May 16, at 1 p.m. at Prairie Street Mennonite Church (1316 Prairie Street, Elkhart, Indiana). Refreshments and storytelling will follow the worship service.