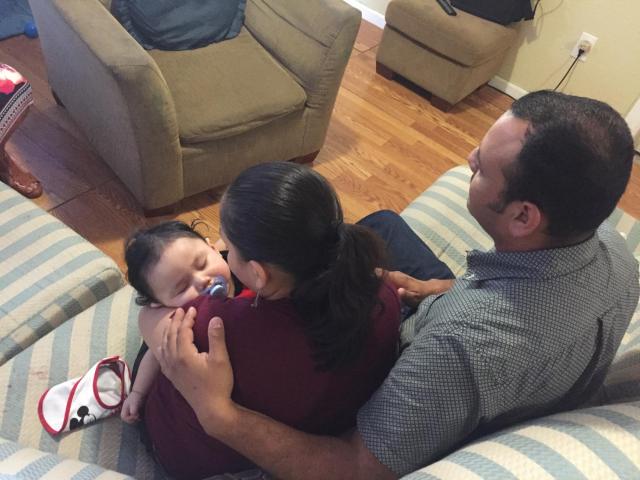 Mennonite Central Committee (MCC) is working with National Immigrant Justice Center (NIJC) to support a mother and father who face deportation after U.S. Border Patrol agents initiated removal proceedings at a Texas hospital where the couple sought emergency care for their infant.

The actions of the agents, whose agency is under the jurisdiction of the U.S. Department of Homeland Security (DHS), violate the federal government’s own policy[i], which prohibits immigration enforcement actions at “sensitive locations,” including hospitals, schools, places of worship, public ceremonies or demonstrations, according to Heidi Altman, director of policy for NIJC.

Irma Francisca Quinones Alamillo and Oscar Enrique Sanchez Islas had brought their 2-month-old son to the emergency room at Valley Baptist Hospital, Harlingen, in May because he had been vomiting constantly and not sleeping for days. Doctors said he needed to be transferred to Driscoll Children’s Hospital in Corpus Christi by ambulance for emergency surgery.

Before the transfer could happen, two agents confronted Quinones and Sanchez at Valley Baptist about their immigration status. The agents came after the couple told a nurse they could not drive to Driscoll because they would likely be detained if they passed through an immigration checkpoint in the town of Sarita, on the route to Corpus Christi.

When the agents insisted on proceeding with immigration processing, the couple pleaded to be allowed to go with their son to Driscoll.

“We were confused, worried and scared,” said Quinones. “We did not understand what was going to happen to us and if they would bring us back to see our son and if we would be able to return to our daughters.” The married couple are parents to three daughters and a son. All their children are U.S. citizens.

Agents allowed the family to go to the hospital in Corpus Christi, but followed the ambulance carrying the parents and their son to the hospital. There agents removed each parent individually to be interviewed and given a charging document known as a “Notice to Appear” in court, the beginning of deportation proceedings.

“When I was placed in a detaining cell at the Border Patrol station, I thought I am not going to see my family for a long time,” Sanchez said. “I was overwhelmed with feelings of despair. The only thing that gave me peace was that I knew God was in control and (I) placed my faith in him.”

Quinones, too, looked to God for help. “I prayed the entire time that I was there, asking God to move the hearts of the agents to allow us to return home to be with our family and for me to make it back in time to see my son before going to surgery.”

Doctors delayed the son’s surgery until federal agents returned both parents to the hospital, Quinones said. The surgery was successful, and the boy has been recovering at home.

“This situation raises serious concerns that federal agents are ignoring their own policy in this matter,” said Tammy Alexander, policy analyst for MCC U.S.’ Washington Office. “It could lead to parents all over the country being afraid to take a child to the hospital. DHS officials need to address this violation immediately. Hospitals, schools and churches must continue to be safe spaces for children and families.”

MCC became involved in the situation when Quinones and Sanchez called a friend for help from the ambulance. At 2 a.m., that friend consulted Ana Hinojosa, an immigration coordinator with the MCC Central States region who works out of Brownsville, Texas, to see if anything could be done to intervene.

Since then, Hinojosa has helped the couple get legal support through NIJC. Lisa Koop, attorney with NIJC, already has represented them at two scheduling hearings and will argue their case in December.

“We are outraged at the manner by which this family was placed in deportation proceedings,” Koop said, “and we are committed to ensuring they receive the strongest possible defense against removal.”

In addition, MCC and NIJC are supporting legislation in the U.S. Congress to strengthen currently nonbinding DHS policy regarding sensitive locations and codify it into law. The Protecting Sensitive Locations Act, H.R. 1815, introduced by Rep. Adriano Espaillat, currently has 41 cosponsors in the House and 14 in the Senate.

Hinojosa and NIJC staff are supporting the parents as they face the possibility of being deported to Mexico and separated from their children.

“As I sat with the family and saw the fear in their eyes and tears rolling down their faces, I thought about the injustice that is happening in our country,” said Hinojosa. “The United States is known as the land of opportunity. This family and many others came here in search of that better life.”

Now in seeking medical attention for their baby, she said, the family faces the possibility of their family being torn apart.

Quinones said her daughters talk every day about what will happen if they get separated. “Our children are experiencing something that other children will never know – what it is like to live every day not knowing if their parents will be home when they return from school. We have felt a despair and an anxiety in these past months that we would not wish on anyone.”

Hinojosa feels their despair, and with MCC, appeals for immigration policies that recognize the humanity of the people affected by existing and future laws.

“At MCC, we call Christians across the nation to advocate for fair and compassionate treatment of immigrants as we follow Jesus’ instructions to ‘love your neighbor as you love yourself.’ We should love each other just as God loves us, bear each other’s burdens and make the load a little bit lighter. I did not know this family prior to this situation but now through God’s love and family, I call them my brother and sister.”