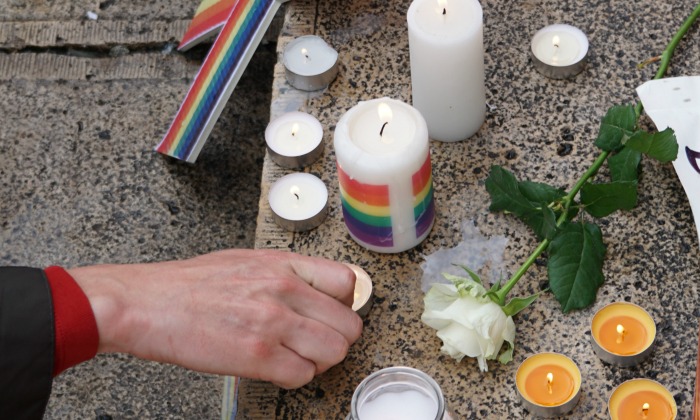 Photo: Prayer vigils have been held around the United States and across the globe to mourn the June 12 shooting in Orlando that killed 49 and wounded 53. (Creative Commons Photo/Miguel Discart)

In the days following the horrific shooting June 12 at the Pulse Nightclub in Orlando, Fla., that killed 49 people and wounded 53 others, many have responded with various views and emotions. Mennonites are among those publicly discussing and mourning the impact and implications of this tragedy.

One of the first was a June 13 post entitled “We are dying” by Jennifer “Jay” Yoder of Pittsburgh Mennonite Church that lamented the killing of lesbian, gay, bisexual, transgender and queer (LGBTQ) people at the nightclub in Orlando. They wrote about their queer Mennonite community and said, “for some of us, we’ve come close to death, looked suicide or addictions or self-harm right in their eyes, stared them down and made it through somehow.”

Yoder described “the violence of the recent MC USA convention in Kansas City” and wrote, “What we found was passing resolutions acknowledging that treating queer folks as less than full members of our Mennonite community results in us being targeted for sexual violence while simultaneously passing a resolution denying us full membership in the community.”

Also on June 13, Willard Metzger, Mennonite Church Canada Executive Director, posted a blog addressing the massacre. He acknowledged that he was feeling “deeply distressed” and was in mourning. He lamented the discrimination experienced by LGBTQ individuals in the “family of faith,” and wrote: “I mourn the way God will be misrepresented. No one should feel placed outside of God’s mercy and passionate love. I don’t want fear and misunderstanding to begin with feelings of hostility. God is not honored in violence. Righteousness is not portrayed through violence.”

The Brethren Mennonite Council for LGBT Interests also released a June 13 statement. It said: “Today, BMC grieves with the Orlando LGBTQ community, particularly the Latinx [Latinos of all gender identities] LGBTQ community. We mourn a cultural context that gives rise to violent homophobia and transphobia. We lament the institutional policies, doctrines and practices that devalue and degrade LGBTQ people. We grieve with a deep knowledge of the LGBTQ community’s worth, gifts and resilience.”

On June 14, a group of 38 members of the Inclusive Mennonite Pastors group published a letter, addressed to Mennonite Church USA, quoting Yoder’s blog, and calling on Mennonite Church USA leaders to respond to the Orlando shooting and offering a list of resources and suggested actions for people to consider in the wake of the tragedy. “To those who are part of the LGBTQIA+ community, your voices matter, your experiences matter, your presence in the Mennonite church matters. We are deeply grateful that you are part of the Mennonite church. We desire to support you in whatever ways we can. If you reach out to any of us we will seek to be a nurturing, Christ-like presence as we listen to you in your grief and anger. We love you,” they wrote.

Without responding directly to these particular criticisms, Mennonite Church USA leaders Patricia Shelly, moderator, and David Boshart, moderator-elect, issued a statement on June 15 grieving the shooting. They wrote: “We are appalled that the shooter specifically targeted LGBTQ Latinos, acting out of hatred for people created in the image of God. We lament the culture of violence in our society and our participation in it.” They went on to say, “We stand with our Muslim neighbors who have condemned this heinous act and have stepped forward to assist the victims. We pledge to work shoulder-to-shoulder with all people of faith—to overcome evil with good, hatred with love, violence with peacemaking and inequity with justice.”

Also on June 15, Glen Guyton, director of convention planning and chief operating officer for Mennonite Church USA, posted a link to an interview with Josh Lewis and a friend, who was interviewed by Anderson Cooper of CNN about his experience during the Orlando shooting.. Glen wrote: “Josh attended MC USA conventions as a youth. He is a member of the LGBTQ community and part of our church community. I am grateful that he and others are safe and I mourn for so many others who were taken. There is no excuse for violence against people because of their gender identity, race, sexual identity or religion. I will do everything in my power to ensure the safety of those who attend Orlando 2017 [the next MC USA convention]. I also acknowledge all our words and statements ring hollow until substantive change happens in our denomination. Guyton also acknowledged that he would be contributing to funds set up to support victims of the shooting and their families, and urged others to do the same.

Sara Wenger Shenk, president of Anabaptist Mennonite Biblical Seminary, Elkhart, Ind., released a statement via email on June 16 that “hate-filled violence toward any person made in the image of God, whether LGBTQ or Muslim, women or men, Latino or Afghan, violates us all.”

While acknowledging that Mennonite faith communities, like other faith communities, are conflicted in their views of homosexuality, political candidates, gun ownership, immigration policies and terrorism, she wrote, “what we cannot be conflicted about if we call ourselves followers of Jesus, is that we will stand in solidarity with those whom Jesus stood with—those whom many others, including religious leaders, despised. For the love of God and neighbor, AMBS joins with other courageous lovers of God who call for all people of faith to stand like Jesus against hatred and violence in any form.”

RAWtools, an organization that turns guns into garden tools, will be in Albuquerque, N.M., June 18 for an event called “Guns into Gardens.” Mike Martin, founder of RAWtools and a Mennonite, wrote in a June 15 email that he would be preaching at Albuquerque Mennonite Church on June 19 and would address the Orlando shooting.

He wrote: “I am sick of having a relevant shooting to talk about at every event I go to. That’s why we do our work. We dream and imagine and plan for a time when it is no longer timely to turn guns into garden tools.”

In the wake of another round of anti-Muslim sentiments following the shooting, Jonathan Bornman, global consultant and a member of Eastern Mennonite Missions’ Christian/Muslim Relations Team, wrote on June 16: “We envision communities of Jesus-followers who cultivate peaceful relations with their Muslim neighbors and bear witness to God’s ministry of reconciliation in Jesus the Messiah.”

He mentioned that recently he saw many Anabaptists at the Iftar celebration (breaking the Ramadan fast) that the Islamic Community Center of Lancaster, Pa., hosted for invited friends and community leaders. There he heard about the threat Muslim communities live under in the United States.

His email concluded: “It is our team’s prayer that Jesus-followers, by abiding in him and embodying who he is, reach out to the Muslims in our midst by building bridges of loving and respectful connection.”

In a June 16 statement entitled “A Time to Weep,” Ervin Stutzman, Mennonite Church USA executive director, wrote, “I weep as I think about LGBTQ Latinos, targeted for slaughter by cruelly cold scheming. I weep as I think of the life of each victim cut too short. A blanket of terror draped over the LGBTQ community, calculated to inspire fear. Dashed hopes and dreams.

I weep as I think of the ways that our families and churches have rejected immigrants, foreigners, and LGBTQ individuals, not truly giving them a place at the table.”

Stutzman mourned the ways Mennonite teaching has contributed to the marginalization of LGBTQ people and pledged to work with Mennonite Church USA’s Executive Board “to find specific ways for our church to extend that welcome as well, especially as we prepare to gather in Orlando for our convention next summer.”

The next Mennonite Church USA convention will take place July 4-8, 2017, at the Orange County Convention Center in Orlando.