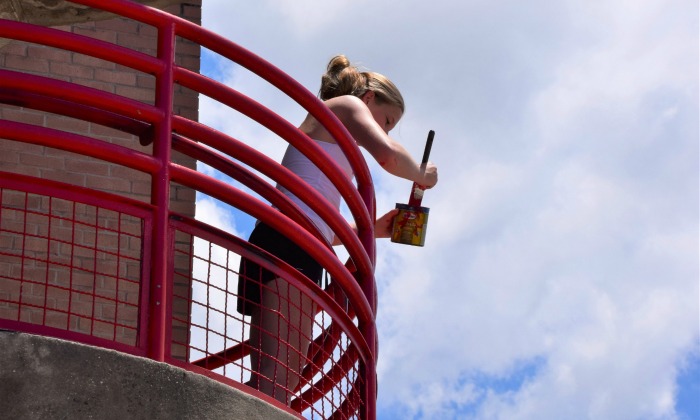 In the Mennonite Mission Network-sponsored servant project program, 1,750 children, youth and adults ventured beyond being served in the air-conditioned Rosen Convention Center to serving others in the blistering Florida summer heat. At 35 sites throughout wider Orlando, they plunged into the grit of daily life beyond the glitzy tourist attractions.  This year, for the first time, convention attendees of every age were automatically signed up for a servant project unless they chose to opt out.

Groups left every afternoon to put the “Love is a Verb” convention theme into action at a variety of agencies. Participants did everything from recycling throw-aways from the city’s vast hospitality network to washing fire rescue equipment at Valencia College. They pulled weeds, painted walls, sorted toys and mopped floors.

While using their hands, they also engaged their hearts and minds as they reflected on the meaning of their manual labor. Two participants at Clean the World, which recycles hygiene items from hotel rooms, reflected on how their assignment helped them to be hospitable to strangers.

“Servant projects show love in action in a lot of ways, and in this instance, it is showing hospitality to strangers by recycling items from the hospitality industry,” said youth leader* Scott Troyer of Cincinnati. “Soap and shampoo are what you provide for guests who come to your home. In a sense, we are helping to bring ‘home’ to people we don’t know.”

Miriam Chalfoun, a teenager from Baltimore, said, “We are taking things that ordinarily would go to waste and are making sure they get used by people who really need them.”

Clean the World collects and recycles these products discarded every day by the hospitality industry and other sectors that generate environmental waste. The recycled products are donated to impoverished people to prevent millions of hygiene-related deaths each year, reduce morbidity rate for hygiene-related illnesses and encourage vigorous childhood development.

No matter the location, bursting the confines of convention put volunteers in a giving – rather than receiving – posture, said Arloa Bontrager, servant project coordinator in Orlando and director of Mission Network’s SOOP and Youth Venture programs. She has directed servant projects at all the Mennonite Church USA conventions since Atlanta 2003.

“It is really important to get away from the convention bubble–and that is especially true in such a heavy tourist setting as Orlando,” she said. “Because of the spin of illusion and perfection that surrounds Disney near to our convention, it took a bit of traveling to get to the sites.

“The work we do together as a church is important. Equally important is becoming involved with the urban context. It gets us out of ourselves to rub shoulders with people and to hear their stories.”

At Mustard Seed of Central Florida, volunteers rubbed shoulders with workers in the warehouse. Some of these workers had been formerly incarcerated for nonviolent crimes, but were getting a second chance, said Kathy Baldwin. She is executive director at Mustard Seed, the only furniture and clothing bank in central Florida.

The agency redeems throw-outs from central Florida’s 1,000-hotel hospitality network, ranging from beds and other furnishings to clothes, toys and strollers.  The “trash” from 23 Disney resorts becomes the “treasure” of families in need.

“We partner with other nonprofit and governmental caseworkers who locate people in homes who need our items,” she said.

“We redeem the irony of how the plenty and poverty exist side-by-side. We are also saving a lot of debris from the landfill. We put our arms around all that could seem negative and put a positive spin on it.”

Turning a negative into a positive was the experience of one volunteer who was not too happy to be leaving the air-conditioning for the heat, Bontrager said. “This volunteer was hesitant to do a servant project. But when he came back, he was very excited and was dreaming about how his community back home could do the same thing.”

This is part of why Mission Network sponsors the servant projects. “They generate some passion and interest in ways that would not happen otherwise, ” Bontrager noted.

*Correction: A previous version of this story identified Scott Troyer as a teenager. He is actually a youth leader.