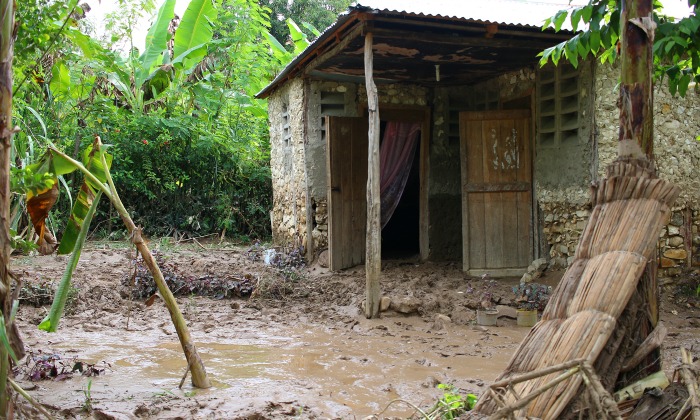 Caption: Flooding caused by Hurricane Irma reached almost a third of the way up the walls of Osa Jonmarits’ home in Otovan, Lachapelle commune in Haiti.

Not even two weeks after Hurricane Harvey made landfall in Texas, Hurricane Irma, a category 5 storm, began its journey across Caribbean islands and Florida, leaving widespread destruction and, in some places, flooding, in its wake. Now downgraded to a tropical depression, the storm’s impact continues to be felt in Georgia, South Carolina and Alabama. Thirty-five people were killed in the Caribbean and an additional 12 deaths have been recorded in the United States, where, some estimates say, as many as 6.7 million people remain without power.

In Haiti, Mennonite Central Committee shared a story of Osa Jonmarits, a community health organizer, and his family, who were awakened in the middle of the night by water rushing into

their La Chapelle home. According to the MCC news release, the family waded through waist-deep water to safety, the parents carrying the children on their shoulders. Following the hurricane, which peaked on the night of Sept. 7, MCC workers put together an assessment team to visit the Artibonite department in central Haiti. Because of its mountainous landscape, the region is prone to flash floods. According to Rebecca Shetler Fast, one of the country representatives for MCC, many communities are accessible only by foot and do not have telephone connections and electricity, so oftentimes damage that occurs in this region is not counted in the country’s official damage tally.

“Despite Haiti missing the center of Hurricane Irma, the damage was severe and widespread across the northern half of Haiti,” wrote Shetler Fast. “One difference because of this is the level of aid Haiti is expected to get, coming just after Hurricane Matthew and (for the U.S., Hurricane Harvey and Hurricane Irma as well). There is fear in Haiti that their suffering will be forgotten.”

MCC is continuing to work at food security by helping provide access to food in the short term and helping individuals rebuild long-term food sources, such as gardens. In addition, MCC is working to help improve basic access to clean water and sanitation, such as cholera treatment and latrines.

MCC is also helping with relief efforts in Cuba, which was pummeled by Hurricane Irma on Sept. 8.

“The destruction is massive on the island in general,” wrote MCC area director Bonnie Klassen in an MCC news release. Klassen has been onsite with Brethren in Christ leaders in Cuba since the hurricane hit. “An enormous number of houses are damaged. A lot of roads are blocked. It has been many decades since Cuba has seen such massive destruction in a hurricane.”

Kevin King, executive director of Mennonite Disaster Service, is also in regular communication with leaders from the MDS Puerto Rico unit. Although widespread damage in Puerto Rico was less intense than expected, the island is seeing an influx of refugees from other nearby Caribbean islands, where the damage was extensive. The unit has put out a request for canned meat from MCC and is working to coordinate efforts to support those who are seeking food and shelter.

The impact in the United States

An assessment team from MDS will head to Florida on Sept. 13 to begin to assess damage and plan for cleanup and recovery efforts.

“These storms are just piling up on top of one another,” said King in a Sept. 11 phone interview. “We, along with FEMA [Federal Emergency Management Association] and many of my national colleagues, deployed many assets to Texas. Now all of us are facing the question of how to respond and manage resource constraints.”

King noted that it is still too early to really understand the full scope of Hurricane Irma’s damage.

“We’re not out of this yet,” he said.  “I think many people say they dodged the bullet from the wind, but I suspect Irma is going to become more of a flooding event.”

By and large, Mennonite congregations are grateful to have been spared extensive damage in the hurricanes. In Fort Myers, Florida, leaders from Iglesia Menonita Arca de Salvacion turned the church building into a temporary shelter space for over 200 people, members of the congregation and local community. From Sept. 8-11, people filled the building, shared meals and participated in three worship services.

“We saw the Lord working. We were blessed,” said Marcelina Pacheco, one of the assistant pastors, in a Sept. 12 interview. “Everyone was sharing whatever they had with one another. And during our services, actually we had two people that came to the Lord and two that reconciled, right during the hurricane.”

Despite heavy winds and rain, Pacheco said, the church building did not sustain any damage and no church members have reported major house damage, although nearly 80 percent of the city’s residents remain without electricity.

Andrew Bodden, associate pastor at Iglesia Menonita Encuentro de Renovacion in Miami, sayid in a Sept. 12 interivew that his family made the difficult decision to evacuate after his kids

became nervous watching news and weather reports. The Bodden family took shelter with former Mennonite pastors David and Madeline Maldonado in Picayune, Mississippi. A drive that should have taken the family 11 hours took over 26, due to bumper-to-bumper traffic.

Bodden stayed in touch with congregation members—both those who chose to stay and those who evacuated—from afar. He is grateful that everyone has reported being safe. The majority of members from their congregation have reported fallen trees, and some have roof damage that will need repair. Many of the households are still without power, and the city still has major gas shortages, leaving many people without access to gasoline as well. Miami Dade County also still has a curfew in place from 7 p.m. to 7 a.m.

“One of the major things we need prayer for is patience,” said Bodden. “People get anxious in this crisis with no water, gas and often no jobs. In many cases, if people are not working, then they won’t get paid, so that creates anxiety and desperation in families, even if the damage is less than expected.”

Bodden also asks for prayer particularly for undocumented immigrant communities in Miami Dade county, especially that they would have access to the services and help that they need and also stay safe from deportation.

“For those immigrant communities with no documentation, the situation is worse, because they are expecting that immigration could also take advantage of the situation and have raids and take people away,” said Bodden, who mentioned that rumors of a raid were circulating in Mississippi where his family and many other Floridians took refuge.

Further south, members of Homestead (Florida) Mennonite Church prepared for the worst but were grateful to report safety and limited damage to the church building and members’ houses. Pastor Rick Lee and his family chose to evacuate further north during the storm but not before helping coordinate a team of volunteers to help church and community members shutter and prepare their houses for the storm.

Speaking on his drive back home to Homestead on Sept. 12, Lee said that several members remain without cell service and electricity, which has made communication back and forth difficult at times. Lee says he’s also not planning for a formal service on Sunday but plans to open up space for the congregation to share about their experiences during the week.

In Tampa, Florida, Roy Williams, pastor of College Hill Mennonite Church, says the congregation is grateful the storm largely skirted the Tampa Bay area. In the lead-up to the storm making landfall, weather projections had indicated that the storm might hit the area full-force, but these predictions did not hold true. Williams works with a Tampa Bay chapter of Feeding America and says the congregation was prepared to move into a helping and relief mode if needed.

He also still urges people to pray for Tampa residents. “It’s just the trauma of the aftermath of Harvey combined with the psychological effects of preparing for a storm,” he said in a Sept. 12 interview. “Please pray for our community. We appreciate the brotherhood and sisterhood of the broader church.”

Ervin Miller, the leader of the Florida chapter of MDS, lives in Sarasota, Florida, and says that although the predictions for the area were dire, MDS will largely focus on cleanup efforts, and there’s not much long-term rebuilding that needs to happen. Miller says he and others are keeping an eye on the unfolding situation in Jacksonville, Florida, where flooding and large storm surges are leading to serious situations and evacuations. He anticipates that MDS may be deployed for long-term recovery efforts in that area and farther south as well.

Alma Perez Ovalle, a member of Sarasota Community Church (formerly Bahia Vista Mennonite Church) and a high school English and Spanish teacher at Sarasota Christian School, was also thanking God for protection and provision. She says she also is grateful for the prayers, love and support the Sarasota community felt from across Mennonite Church USA.

“I had phone calls and emails from as far away as Colombia. There were calls from members of the Mennonite Schools Council and international service participants and Marlene Bogard of Mennonite Women USA,” she said in a Sept. 12 phone interview. “We’re all grateful for the prayers and the love we felt.”

Ovalle said that many teachers, students and administrators came together this morning to clean up debris and damage surrounding the school. Sarasota Christian, a preschool through 12th-grade Mennonite school, will reopen on Thursday, Sept. 14. The school also served as a shelter for several faculty and staff members and their families during the storm itself.

Prior to the storm, Ovalle said, students had been advocating for a service trip with MDS to help with Hurricane Harvey cleanup in Texas, after getting a taste of service during a spring-break service trip to South Carolina this year. Now, students are finding opportunities to serve closer to home.

“These kids were already being built up through faith-forming opportunities and learning about caring for those around them,” she said. “It’s really cool that this clean-up effort was coming from the kids. I was grateful for that.”