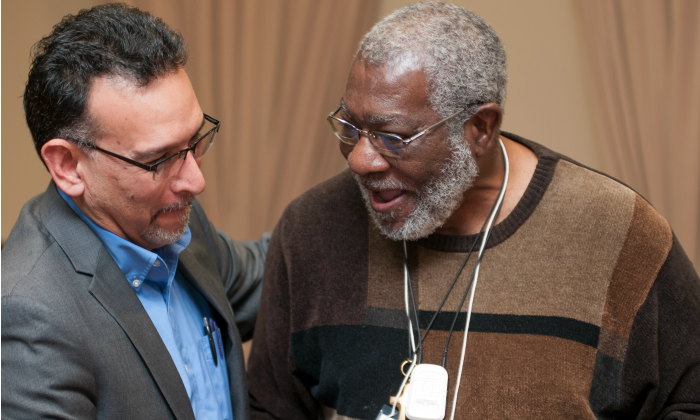 The Minority Ministries Council (MMC) reconvened many years after the dissolution of the Council in 1973 for a conference, titled: “Black, Brown, and Mennonite: Lessons from the Chicano, Puerto Rican, and Black Freedom Movements for the Mennonite Church,” from March 29–April 1 at the Greencroft Community Center in Goshen, Indiana.

When former council members arrived, they took part in oral history interviews with Goshen (Indiana) College history students and organizers of the conference. The conversations were recorded and will be transcribed and held in the Mennonite Church USA Archives for future access by researchers. Overall, 18 separate oral histories were shared, totaling over 36 hours of stories.

“It’s truly a beautiful thing seeing [MMC leaders] all here together,” said Felipe Hinojosa, associate professor of history at Texas A&M University and organizer of the conference. “The last time they were all together was 1997 and not all of them were there.”

“I’m really here for the reunion more than anything else,” said Neftali Torres, a member of the MMC. Torres said he hadn’t seen some of members of the Council he since the early 1970’s.

Powell, along with John Ventura and Lupe de León, leaders in the Latino Mennonite community, decided that rather than separately combating the issue of minority representation throughout the church, combining their efforts would lead to more effective action.

After four years of work, the Council was eventually disbanded in 1973 and separate constituency groups were formed to represent people of color across the denomination. The MMC was the precursor to current Mennonite Church USA constituency groups including the African-American Mennonite Association, Iglesia Menonita Hispana and Native Mennonite Ministries.

Over the weekend, the members were part of panel discussion in which they spoke on the work of the council and the somewhat controversial disbanding of it.

The members expressed belief that the church failed to support the initiatives put forth by the MMC and many within the denomination felt uncomfortable with the radical changes that were pushed by the Council, like leadership positions for people of color. Competing ideas from within the Council hindered progress as well.

“I really hope the church recognizes how important this movement was; how they worked and didn’t work in isolation,” said

Hinojosa. “It ended with differing ideas, but there are lessons from disagreements. It’s not about the end, but the struggle.”

While the conference was a way to gather together and reflect on the past, the theme for the weekend focused on lessons from those events that can shape the future. Many academics whose work integrates both religion and race spoke during keynote sessions that emphasized their own ongoing work as well as the work of the MMC. On March 30, Dr. Timothy Matovina from the University of Notre Dame spoke about “Religion and the Chicano Movement” and Dr. David Evans from Eastern Mennonite Seminary, Harrisonburg, Virginia, spoke on March 31.

Tobin Miller Shearer, associate professor of history and African-American studies director at the University of Montana, Regina Shands Stoltzfus, assistant professor of peace, justice and conflict studies at Goshen College and Hinojosa all gave short presentations on their work during a panel discussion, where questions were asked to understand the context of the work of the MMC in today’s society.

“In order to see where we are going, we must see where we must see and understand where we have been,” said Miller Shearer. Miller Shearer has extensively studied the work of the members of the MMC. “To see all these voices in the room is powerful, it really affirms their sacrifices,” he said during a later interview.

During the panel, Miller Sherer went on to discuss three parallels that plagued the Mennonite Church during the time of the MMC and still today: money, sex and power. During the 1960s, many of the problems the MMC sought to address revolved around these three ideas. The group focused on issues such as addressing interracial marriage, funding for events run by people of color from the Mennonite Board of Missions or even holding positions of power in congregations of color, which were often run by white pastors.

When a panel of Goshen College students who identified themselves as activists on the College’s campus took the stage to discuss some of the issues they see today with the council and other conference members, some of these same themes were echoed.

“In many ways, it seems worse than when we left it,” said Torres.

The MMC was a radical movement for the Mennonite Church and something that not all were open to embracing at the time.

“It’s this issue around power that we’re still struggling with,” said Powell. “The question is, how do we get the system to listen rather than sitting around a table like this and nodding and agreeing?”

The student panel included representatives of campus clubs such as the Black Student Union, Latino Student Union, Prevention Intervention Network and International Student Club. Students discussed issues such as the lack of intersectionality between clubs, specifically in how they compete for the same funding; the hegemony of white Mennonites on campus and addressing questions concerning sex, especially in the context of Mennonite culture, echoing the themes of money, sex and power.

After the student panel shared, Powell led all those gathered in a time of prayer, surrounding and laying hands on students

as a show of support.

Many of the students on the panel also conducted the oral history interviews with members of the council. During the conference’s closing session, Michelle Armster, executive director of Mennonite Central Committee Central States, led attendees in a ritual of blessing a new generation of leaders. Armster called all attendees age 35 and younger to come forward and MMC leaders took turns handing them a candle or a stone, as a symbol of passing on a blessing for leadership to a new generation.

“It felt really good passing on the stories,” said Powell. “The students were inspired and engaged. We were passing the mantle I guess, just in a different place. It’s a mentoring situation.”

Joshua Stoltzfus is a senior at Goshen (Indiana) College and serves as the Features Editor for the Goshen College Record.

You can read more about the Minority Ministries Council in the February issue of The Mennonite magazine.