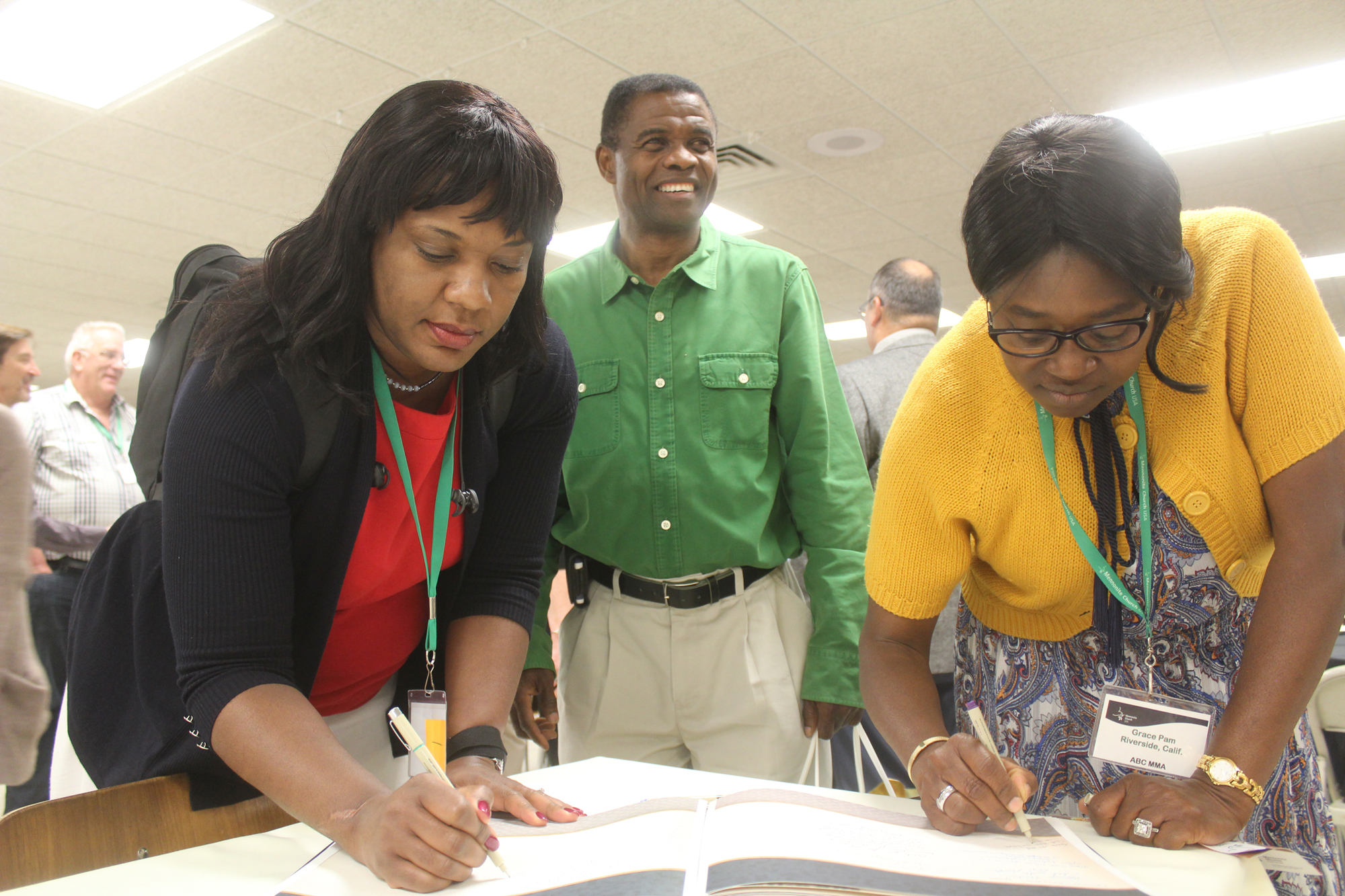 Photo: Alicia Manning, left, of the African American Mennonite Association, and Grace Pam of the African Belizean Caribbean Mennonite Mission Association sign a memory book for Ervin Stutzman, who is retiring as executive director of Mennonite Church USA, as Femi Fatunmbi of the ABCMMA looks on. –Alex Woodring/MC USA

After two years of work, the Mennonite Church USA Panel on Sexual Abuse Prevention presented their observations and recommendations, notably regarding noncredentialed leaders, to the MC USA Executive Board and Constituency Leaders Council.

The Executive Board and CLC discussed the panel’s report, presented by three of the panel’s members, at a joint meeting April 12-14 at Dock Mennonite Academy, Lansdale, Pennsylsvania. The board voted unanimously to receive the panel’s report and commend its use across MC USA.

The report calls for “a cultural shift” within the denomination regarding healthy sexuality, including “trusting and valuing the voices of victims and survivors and rooting out unhealthy and degrading perspectives of women.”

The panel’s work grew out of a churchwide statement on sexual abuse passed at the MC USA convention in 2015 in Kansas City.

“We are beginning to understand the pervasiveness of sexualized violence in our congregations and communities,” said Jenny Castro, a panel member.

The report notes that current policies and procedures focus on credentialed leaders.

“However, it has become clear that this focus has revealed a gap in accountability and confidence in action when leaders who do not hold formal ministerial credentials violate boundaries and abuse power in relationships with persons to whom they owe protection and accountability,” the report said.

The panel’s report, which will soon be available online and translated into Spanish, describes how to respond to allegations of sexual abuse by a noncredentialed leader within a congregation.

She noted the importance of establishing clear processes proactively, rather than waiting until a time of crisis, and the need to involve people outside the congregation.

“Sometimes we think of confidentiality when we’re really operating out of secrecy,” she said.

The Executive Board approved a policy clarifying that people in same-sex relationships may serve in leadership roles appointed by the board.

The need for clarity arose because of what moderator David Boshart called “a painful experience” last year. The board appointed a person to the Leadership Discernment Committee whom most did not know was in a same-sex relationship. After additional board members learned of the relationship, the board suspended the appointment.

In September, the board reconfirmed the appointment, but one member resigned amid the controversy. The board recognized that the lack of a policy contributed to the problem.

By a unanimous vote, the board approved a policy allowing anyone to serve who is in good standing with his or her congregation or, if a credentialed person, the area conference holding the credential.

The policy says “lifestyle factors . . . will be taken into consideration when nominees are presented to the board.” But, as executive director Ervin Stutzman observed, “not all of us will agree on what constitutes a lifestyle issue that disqualifies somebody.”

Placing authority at the congregational or conference level is consistent with the board’s desire to lead by “advancing a vision rather than resolving conflicts and disagreements within and among conferences and congregations,” the policy says.

The board asked the CLC for counsel before making a decision. A poll showed CLC members about equally divided, though some wanted revisions that wouldn’t have changed the policy’s basic position.

The board’s decision on leadership appointments prompted several CLC members to express frustration. During an open discussion time, five people of color spoke, several saying, directly or indirectly, that they opposed leadership by people in same-sex relationships and that they felt their voices had not been heard.

“I leave this meeting with a heavy heart,” said Lupe Aguilar of South Central Conference. “I am disappointed. The decision has been made, but we are going through the motions. I felt that my comments and questions were ignored.”

But he and others said they remained loyal to MC USA.

“I think that in South Central Conference we will walk with you — with what is left of MC USA,” Aguilar said. “But we need to take responsibility for what we are doing. We are going against God’s word. . . . As we walk with you, the Hispanic congregations will be praying.”

Grace Pam, representing the African Belizean Caribbean Mennonite Mission Association, said Mennonites were disobeying the word of God “because we are afraid of who we will offend.” Yet, she said, “I am in the Mennonite church because I love to be part of you. What can be done to make us feel a part of it?”

Sandra Montes-Martinez of Iglesia Menonita Hispana (Hispanic Mennonite Church) said: “I want to feel that this is a place where we can express ourselves and not feel like an alien because we don’t speak and act as the majority. I want to walk together with our differences.”

Three conferences — Mountain States, Central District and Allegheny — have taken a varying position from the denomination by credentialing those who are in same-sex relationships.

The group of conference ministers recognized that they all value the denominational documents that address this matter, but they interpret and carry them out differently. These documents include the Confession of Faith, the Membership Guidelines and delegates’ 2015 reaffirmation of the guidelines, and the 2015 forbearance resolution. Further, they respect various conferences’ discernment.

They agreed to create a statement of understanding that reflects the fact that denominational polity grants authority to conferences to establish credentialing criteria.

They said their time together inspired hope, trust, honesty and grace, and reminded them how much they need each other.

The CLC heard an update on Journey Forward, a two-year process of discernment growing out of the Future Church Summit held in 2017 in Orlando, Fla.

A study guide called “Pathways” will go to congregations by June 1. Input from across the church will shape further work on a “Renewed Commitments” document in preparation for the 2019 convention in Kansas City, Mo.

Leaders emphasized that Journey Forward is a process, not a document, and that the “Renewed Commitments” document emerging from it does not replace earlier church statements.

The Journey Forward process is designed to articulate MC USA’s core values, to guide the creation of a new strategic plan and to set priorities at all levels of the church.