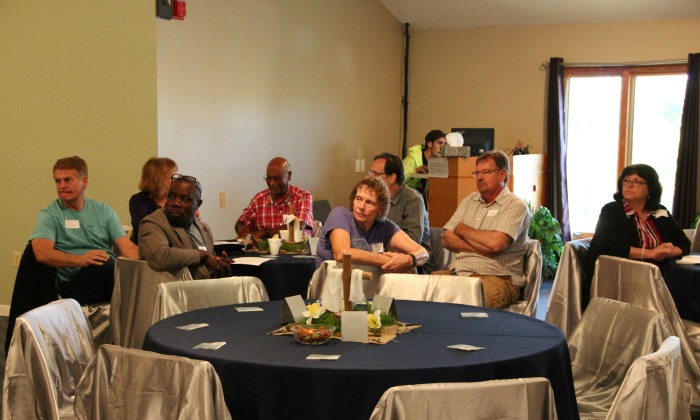 At their March 25 meeting at Homestead (Florida) Mennonite Church, delegates from Southeast Mennonite Conference (SMC) were busy: The group approved four recommendations regarding the future of the conference, its structure and its relationship to Mennonite Church USA.

SMC currently faces questions about sustainability and funding and is in the midst of a leadership transition after former conference minister Marco Guete retired last year.

“The task force’s role was to pull together basic information about the current status of the conference from leadership in congregations, and then to formulate some recommendations out of that,” said J. David Yoder, chair of the task force, in an April 7 phone interview.

Looking at the feedback it received, the task force proposed four recommendations for consideration by delegates at their October 2016 meeting.

One recommendation examined the conference’s ongoing affiliation with MC USA. The recommendation stated that “given the SMC shared understandings around the issues of homosexuality… Southeast Mennonite Conference go on record as planning to leave Mennonite Church USA should the forbearance resolution passed last summer become a permanent position or practice for the church.

The Forbearance Resolution, approved by MC USA delegates at the 2015 assembly in Kansas City, Missouri, “acknowledges that there is not currently a consensus” on matters related to same-sex relationships. It “calls those in

Mennonite Church USA to offer grace, love and forbearance toward conferences, congregations and pastors in our body who, in different ways, seek to be faithful to our Lord Jesus Christ on matters relating to same-sex covenanted unions.” In addition, delegates in Kansas City also passed a Resolution on the Status of the Membership Guidelines, which states that no changes to the current guidelines will be entertained until 2019.

Roy Williams, a member of the task force and pastor of College Hill Mennonite Church, Tampa, Florida, noted that the survey indicated that the conference was divided about its relationship to MC USA and that whether the conference chose to stay or leave, some congregations said they might leave the conference. In October 2015, the conference reaffirmed its 1987 “Statement on Homosexuality,” which states, “We do not see homosexual practice as another choice to be accepted and approved as part of our practice and beliefs.…We will not be panicked into rash judgments or reactions by either secular or religious groups in their bold and raucous demands for recognition and acceptance of homosexuality; rather we will take our leading from Christ’s teaching and example. While it is very clear that we cannot condone, accept or overlook homosexual practices, it is equally clear that Christ’s way of dealing with sinners is one of restoration and healing, rather than of condemnation. It is this model that we attempt to follow in all dealings with the weaknesses and temptations of humanity.”

“Two years ago, we basically reaffirmed the 1987 statement, and so there’s a lot of consensus around that theologically in our conference,” said Michael Zehr, conference moderator and church planter in Key West, Florida, in a March 31 phone interview. “The truth of the matter is that for some people the task force statement is too strong and for some people that statement is not strong enough. We tried to find something that people could agree upon.”

Juanita Nuñez, member of the conference’s leadership board and pastor of Iglesia Cristiana Ebeneezer, Apopka, Florida, noted that the conference has “always had a good relationship with MC USA” and that relationships with Mennonite Mission Network and Mennonite Central Committee have been especially important, but she also noted that there have been concerns about the future of the relationship. But she emphasized that MC USA affiliation was not the primary focus of the March meetings.

“In this meeting, we were not talking about whether to leave MC USA. We were talking about what will be the future of Southeast Mennonite Conference and how can we relate to MC USA,” she said in an April 7 phone interview. “We are still talking. It’s been a conversation.”

The three additional task force recommendations were these:

Due to Hurricane Matthew in Florida, the conference’s October meetings were cancelled and votes on the task force’s recommendations were tabled until the March 25 meeting.

Williams said he went into the meetings with “some trepidation.” “Were we on the right target? Were we reading the cards incorrectly,” he said in an April 3 phone interview. “We wanted to make sure we were listening and articulating well and hoping the conference would stay together.”

At the meeting, after vigorous discussion, SMC delegates approved all four statements, with a few caveats and notes for the conference’s leadership board going forward.

“All four statements were affirmed by a strong margin,” said Zehr. “The task force did a good job of taking the temperature of the conference and where we’re going. Instead of asking questions of what we need from conference, we’re really focusing on what God is calling us to do together.”

Zehr noted that among the concerns raised was that the conference would continue to work at making sure conference leadership represents the full diversity of SMC congregations.

Williams echoed this priority as well. “We’re a majority minority conference, and we are dominated by the Anglo method of doing business in our conference,” said Williams. He cited the conference’s practices of tracking membership as one example. Currently, the conference uses baptized attendees to report a congregation’s membership numbers. Williams notes that a number of Hispanic congregations in the conference draw in hundreds of attendees, but many members of the congregation may be undocumented workers and subject to immigration legislation that puts them at risk of deportation or transient employment. These congregations may have an average Sunday morning attendance of several hundred, but the number of regular, baptized attendees measured by the conference may be quite small.

“We need to find a different method of counting numbers and tracking contributions so that we can reflect the full ministry of our minority congregations,” said Williams.

Williams was encouraged by the participation during the March meetings and is hopeful about the conference’s future.

“If people care about our conference, they will start filling it up with their leadership, ownership and yes, even funding,” he said. “I have hope and confidence that all of our people will take responsibility and we will have better relationships going forward.”

For Nuñez, this assembly was also a hopeful one, despite the real challenges the conference is facing.

“It was a very productive meeting,” she said. “We hold on to faith and we hold on to the Lord and we know that changes will have to be made, but we are looking to a brighter future.”

Zehr also hopes the conference will not see conversations about change as inherently negative. “Oftentimes when we’re ready to let go, something even more valuable grows up in the place of whatever it is that we’ve allowed to change. I have a sense that in Southeast we’ll continue to find ways to care for and support each other as congregations, regardless of what form that takes.”

The meetings opened with worship together, led by Rick Lee, pastor of Homestead Mennonite, and the delegate meetings were book-ended with extended times of prayer.