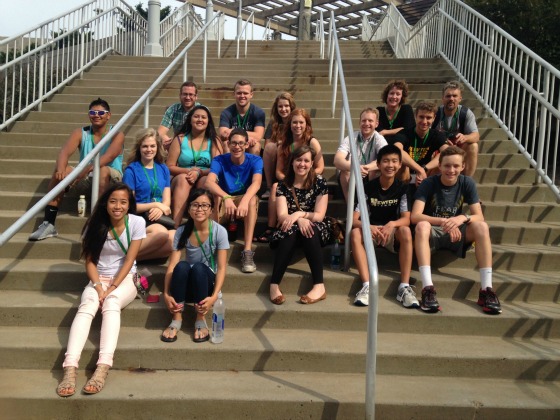 The Ministry Inquiry Program (MIP) originated at Bethel College, North Newton, Kansas, in 1987, and this year two Bethel students were part of the program after a several-year hiatus.

For Janzen, being so far away from home was a new experience. He drove nearly 1,500 miles from his home in Henderson, Nebraska.

Janzen spent two of his 11 weeks at the two Mennonite camps that are part of Pacific Northwest Mennonite Conference, Drift Creek in Oregon and Camrec in Washington. At Drift Creek, he worked with senior high youth and at Camrec with elementary and middle school-age students.

In addition to his camp experiences, Janzen spent much of his time, “…hanging out with people from church, which is part of office work. I spent a lot of time with the quilting ladies. I did learn how to quilt. I’m not good, but my grandma should be proud.”

He added, “I had good coffee-shop conversations with the senior high youth on Sunday mornings. With the middle school youth, Wednesday nights were especially fun. I marveled at how welcomed I was by these 6th-, 7th- and 8th-graders and the youth pastor, Bryce Larson.”

Janzen also did a self-directed study of family systems, using the work of Murray Bowen, and of the narrative sermon, which he put into practice himself from the pulpit later in the summer.

At the end of the 11 weeks, the senior biology and Bible and religion double major felt that his “call to ministry was strengthened and affirmed. I learned about the importance of relationships, and that I have a passion for youth ministry. I also feel like this experience is helping me with my work as a student chaplain [at Bethel this year].”

Unlike Janzen, Allie Shoup stayed close to home for her MIP experience.

Shoup, a senior Bible and religion major, was born and raised in Wichita, in Central Community Church (affiliated with Church of God, Anderson). She also lived for periods of time in Papua New Guinea and Indonesia when her family did mission work with Wycliffe Bible Translators.

Shoup met her husband, Will, in a class at Wichita State University taught by Wes Bergen, a member of New Creation Fellowship Church, a Mennonite congregation in Newton. “We found a place of solace in the Anabaptist faith,” she says.

The couple married in 2013 and eventually decided to finish their undergraduate education at a Mennonite college.

The MIP program was not on Shoup’s radar until Bethel campus pastor Peter Goerzen mentioned it to her.

“This was the first time [ministry] was ever presented to me as an option,” Shoup says. “There were no women in leadership at Central Community Church, and other churches we attended specifically forbade it.”

She chose Bethel College Mennonite Church because “I wanted to work with a female lead pastor, which was a new experience for me.”

During her 11 weeks at BCMC, Shoup assisted with children’s and youth Sunday school as well as Vacation Bible School; was a senior high youth sponsor for the Mennonite youth convention in Kansas City; visited with congregation members; assisted with funeral planning and services; and “learned about how to create and maintain healthy boundaries.”

She also appreciated being able to observe what it was like for a congregation and pastoral team to prepare for a transition, as Regier Kreider left BCMC during the summer to assume a new role as Western District Conference minister.

The three experiences that had the most impact, Shoup said, were the dinners she and Will had with members of the congregation; the Mennonite Church USA convention; and preaching, which she did twice.

An MIP student usually gets room and board as part of their compensation for the program. Since Shoup was living at home, she arranged to eat meals with people in the congregation several nights a week.

“I found these were not just casual meals, but where some of the hard work of the congregation takes place. This might seem small, but it’s a window into the difficulties and joys of congregational ministry—a wake-up call to some of the realities.”

Attending the convention with a group of youth “was a beautiful reminder that I am not cool. I’m not essential to their process of growth—I’m a bystander and a coach.”

And, she adds, “observing the Mennonite community on a large scale was very valuable.”

As she prepared to preach, she wondered: “Why me? An undergraduate, no master of the divine, asked to speak to some of the most prominent and influential members of the community.”

Shoup says she found her answer. “Because I’m a child of God with a voice and a vision for His Word that matters.”

Shoup’s MIP experience “significantly affected my decisions as I move into my senior year. I have to ask: ‘What is the next most faithful step?’ I don’t have it all figured out, but I do have to move forward.”