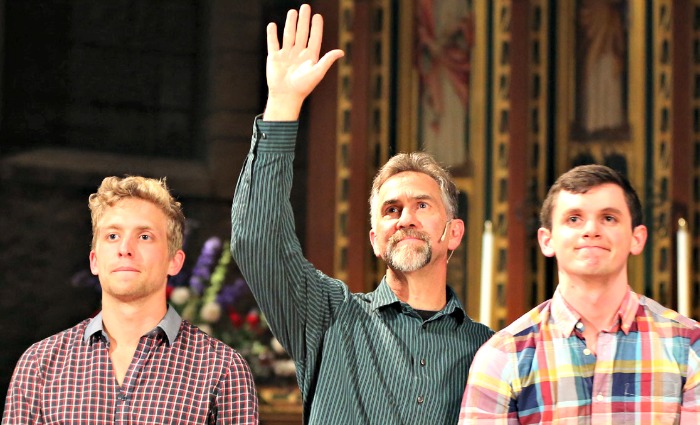 Ted and Co. received a standing ovation from over 450 attendees following their performance encouraging conversation on homosexuality issues on Saturday, July 4. Over 50 youth rushed the front of Grace and Holy Trinity Cathedral for prime viewing seats on the floor when the space filled close to capacity.

The 70 minute production, Listening for Grace wove heartbreak, humor, and music into a journey of hope for Daryl, a widowed man, who wrestled with his son’s recent coming out, grieved his wife Grace’s death, and worked to reconcile his congregational views with his son.

A piano and cello echo the mother and son’s voices as one speaker portrays the protagonist and the voices he encounters on his journey. Over 100 attendees continued the conversation at an impromptu talkback session with the three person cast.

Ted Swartz, playwright, actor, and owner of Ted and Co. TheaterWorks, said he hoped the instrumentally-driven production would facilitate conversation despite disagreement over the recently passed “On the Status of Membership Guidelines.

“Perhaps even more when the resolution that’s been passed regarding membership that the show will encourage more listening to occur, because the resolution doesn’t mean we can’t continue conversation,” said Swartz.

Justin Yoder, actor and musician portraying the son, said people often comment on his role’s silence. “We only hear his voice through the cello. They have noticed that we hear the cello and we see the son, but we don’t hear him speak,” he said.

“We usually say, ‘Good. Good that you noticed that.’

“Because I think that silence represents the way this conversation has happened in our congregations and our Church, where LGBTQ people are still silenced and not heard while being talked about.”

Keith Lehman, an attendee from Cincinnati Mennonite Fellowship stayed for the talkback session. “I think that in light of some of the painful decisions that we made this week it has a purposeful message for the church and I hope redemptive message for the church,” said Lehman. “I thought it was interesting that the answer he [Justin] gave about being present about not being heard were great answers in light of people in the LGBT community.”

Attendees from Rainbow Mennonite Church in Kansas City thought the music was an integral, thought provoking element of the production. Katie Dyck said, “I think music is a language we all can speak and hear and music in the Mennonite church is a powerful presence and I think that it was smart of them, intentional of them to have that as a unifying element to it.”

Swartz commented that when working with a theatrical director, she noted that “It’s not a propaganda piece. It needs to feel like a piece of art.”

“Music is just a fascinating art form in that it evokes emotion in a way that nothing else does, and it enables us,” said Swartz.
“I think it does the same thing as laughter does that laughter does it makes you vulnerable and more open and when you are open empathy is not far behind.”

“Listening for Grace” is Ted and Co.’s eighth appearance at Mennonite Convention and the twenty-fifth anniversary of their first appearance. It originally premiered as “Learning to Play” in the fall of 2013. In January 2014, the 70 minute final version premiered with live music as seen today. The show website continues the conversation after each show.

“I would hope that people would always remember that there are faces and stories to conversations, that they are not issues. They are people,”
Swartz said.