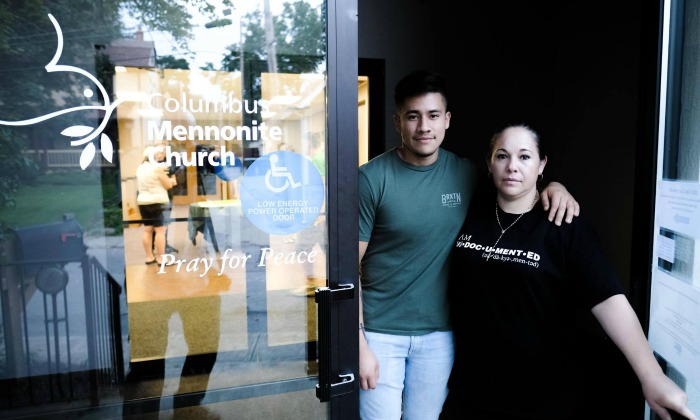 On Aug. 24, Edith Espinal, an undocumented long-time resident of Columbus, Ohio, and mother of three children, made the decision to take sanctuary at a local congregation. And on Sept. 4, Espninal entered her new, indefinite home-away-from-home at Columbus Mennonite Church, where church members gathered to greet her with handmade signs and singing the words, “Caminamos in la luz de Dios” (“We are marching in the light of God”). This action made Espinal the first individual to be publicly granted sanctuary in Columbus and Ohio. Espinal remained at the church for only two days before being granted her additional time to apply for a stay of deportation, due in part to widespread public coverage of her move to claim sanctuary.

Espinal wears a GPS tracker on her ankle at all times, given to her by Immigration and Customs Enforcement (ICE). According to Dan Clark of Faith and Public Life, in an interview with WOSU of Columbus, Espinal came to the United States on “advanced parole,” a status that allowed her to be in the country legally while applying for asylum. However, after years of efforts, Espinal was not granted asylum, and her legal status in the United States changed. She had been ordered to report to ICE on Sept. 5 for deportation.

Instead, on Sept. 5, Espinal, members of Columbus Mennonite Church and Clark, along with other ecumenical and nonprofit leaders, hosted a press conference announcing Espinal’s decision and the congregation’s support for her.

Espinal spoke at the event, saying, “I don’t want to leave this country. I’ve been here in Columbus more than 10 years and I’m fighting to keep my family united.”

Following the press conference, ICE requested that Espinal report to their offices the following day to check in. Although at first expressing reservations, Espinal’s attorneys advised her to take the appointment. Columbus Mennonite pastor Joel Miller was able to accompany Espinal, her son, Brandow, and her social worker to the ICE offices. ICE officials informed Espinal that she had been granted two weeks to apply for a stay of deportation. While waiting for the result of her application, which could take up to two months, Espinal will not be a target for deportation and can remain at home.

Miller says the congregation is aware that the need for sanctuary may return, for Espinal and for others.

“We have more time to consider how these last two weeks inform how we move ahead, to continue to prepare ourselves and our space,” wrote Miller in a Sept. 7 email to the congregation. “Edith, and many others like her, are subject to the whims of a cruel system. Even though we are not currently hosting her in our building, this is by no means the end of the story. Let’s proceed prayerfully and powerfully.”

The process of becoming a Sanctuary congregation

Barbra Gant, a member of Columbus Mennonite’s leadership team, says the request from Espinal moved the congregation into quick action but that the seeds for this work have been taking root for a long time. Gant said the congregation has been active in distributing signs across Columbus that bear the words “No matter where you’re from, we’re glad you’re our neighbor” in Arabic, English and Spanish and that this was a chance to show that the congregation takes those words seriously.

“A couple of passages from the Gospels keep coming to my mind,” she said in a Sept. 7 interview. “Especially the two greatest commandments, that you love the Lord your God and also love your neighbor. If we want to be there for vulnerable neighbors, this was one chance, and we have a unique opportunity because we own a church building.”

Members of the church sprang into action, renovating a crib room to serve as an apartment, installing a shower in a nearby bathroom, working with Espinal to set up a schedule of individuals to accompany her at the church overnight and coordinating food and other services with other local, nonprofit organizations and churches.

“Our congregation values having good, thoughtful process and lengthy conversation,” said Miller in a Sept. 6 interview. “What we found superseded that process time was protecting vulnerable people. I was really surprised and encouraged by the amount of support the congregation offered on this short term of notice.”

Miller and Gant both say the congregation has learned a lot: about the injustice present in the U.S. immigration system, about the challenges undocumented individuals face and about what sanctuary looks like and means.

“One thing I’ve learned is that there is an energy to do something in our congregation,” said Miller. “I think we are troubled by what we see and hear, and we talk about that, but when there was an opportunity to do something concrete alongside a person who was fearing deportation, there was a tremendous amount of energy and time and resources and money coming forward.”