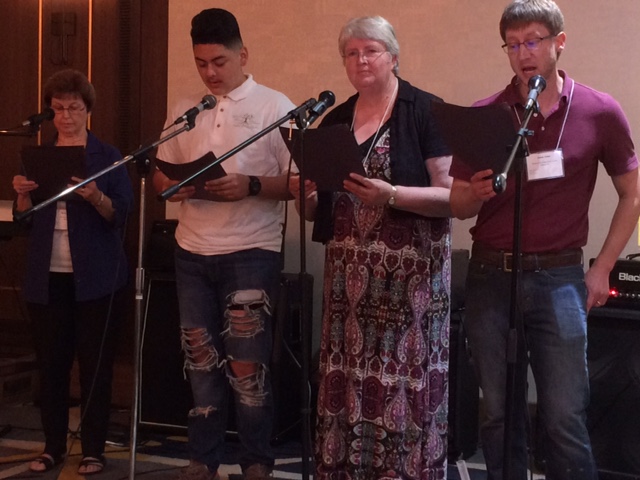 Meeting Aug. 4-6 in Arlington, Texas, some 140 Western District Conference members celebrated the 125th anniversary of WDC. A readers’ theater presentation during the opening worship session on Aug. 4 recounted some of the history of the conference, which formed in 1892 out of the Kansas Conference, which had formed in 1877. A timeline on a table provided the opportunity for congregations to add to the history.

In her sermon at that opening worship, Heidi Regier Kreider, WDC conference minister, spoke of her ancestors, who came to Kansas from Prussia, now Poland, in 1880, and quoted from letters they wrote back to relatives in Prussia. She compared these with Paul’s letter to the Colossians and referenced Colossians 2:1-7, the text from which the conference’s theme, “Rooted and Built Up in Christ,” came.

“The words of our spiritual ancestors are like hidden treasure,” Kreider said. But she went on to note that “WDC does not have one official history but many interpretations, many stories.” When we dig into our history, she said, “we discover a treasure trove of faithfulness.” But we also uncover painful realities, she said, such as taking land from Indigenous people, racism, sexual abuse, the estrangement of women and LGBTQ people, conflict and the avoidance of conflict.

“It is only in struggling with the painful realities of our history that we discover treasures,” Kreider said. As we claim our history, she said, the integrity of the church will depend on how we live out Paul’s call to live lives “rooted and built up in [Christ].”

In the delegate assembly on Aug. 5, WDC moderator Anita Kehr read from a statement from WDC’s executive board that objected to a Texas law, known as SB4, that goes into effect Sept. 1. The bill, sometimes described as a “ban on sanctuary cities,” makes Texas a much less welcoming place for immigrants, both documented and undocumented.

The WDC statement “laments the passage of this law characterized by rejection, discrimination and racial profiling and urges that this law be rescinded.” It goes on to call Mennonites to “stand in solidarity with our Hispanic-Latino/a brothers and sisters and with other people of color in the rejection of this law.”

Kreider also reported on the state of WDC. She noted challenges many congregations

face, including conflicts over theology and supporting members with mental illness. She also noted the ways many congregations are living out their faithfulness. She named some of the many resources WDC has provided, including training in dealing with sexual abuse and training for Hispanic pastors. WDC has focused on church planting and immigration issues in the past year. For the first time in a while, she said, WDC has a full staff after several years of staff transitions.

Jeff Koller, chair of the WDC Resource Commission, reported that the commission plans to launch a year of evangelism focus in 2018, to help the conference explore what an Anabaptist understanding of evangelism might look like.

Phyllis Regier, WDC treasurer, reported that the 2018 expense budget is $577,850, $10,000 less than the previous year’s budget. The budget passed unanimously.

The WDC Executive Board received a request from Kingman (Kan.) Mennonite Church to withdraw from WDC and join nearby South Central Conference. Ray Reimer, moderator-elect of WDC, read a letter from the congregation making the request. The letter referred to the “Rainbow resolution” passed by WDC delegates in 2015, which allows congregations to affirm same-sex relationships, as an impetus for the congregation to want to leave WDC.

On Saturday evening, attendees traveled to Iglesia Luz del Evangelio in Dallas for a mini festival that included a meal and games for children and adults.

If we are rooted in Christ, he said, we will overflow. He noted that Willow Creek, a megachurch in the Chicago area, did an extensive study of its members to measure if people loved God. They found that the question that’s at the basis of loving God is, Are we making disciples?

Paul says that being rooted and built up in Christ “is not about you,” Garland said.

He told about being in an accident in which he and his wife were seriously injured. He thought he had lost everything. When he got better, he heard God tell him that his life and all that he has belongs to God.

“When we serve and follow Jesus, it literally stinks,” Garland said. Jesus touched lepers and healed people who were “unclean.” “If we can get past serving traditions…and serving ourselves,” he said, “we are rooted and grounded in Christ.”

The most important thing in making disciples, he learned, is knowing we are loved by God. That is the basis of overflowing thankfulness.

Kathy Neufeld Dunn, associate conference minister, announced that next year’s WDC assembly will be held July 27-28 in Kansas. The keynote speaker will be Bryan Moyer-Suderman.