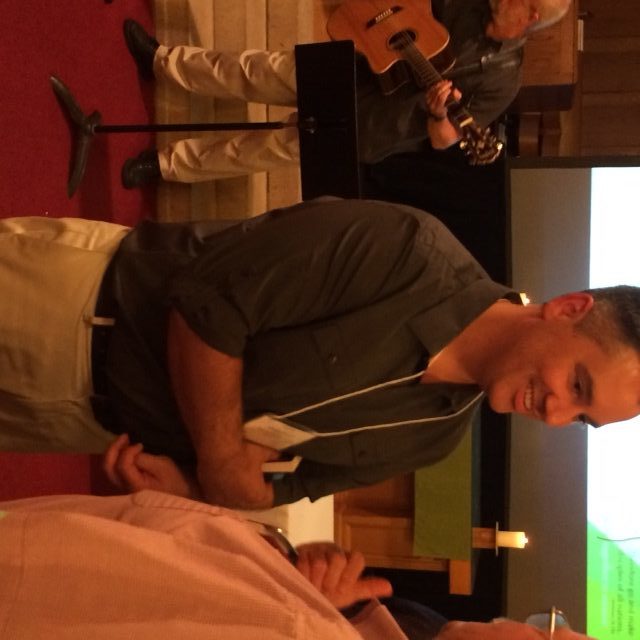 After last October’s Western District Conference (WDC) assembly, where delegates passed a resolution that put the conference at variance with Mennonite Church USA, this year’s meeting was subdued. Other than making some bylaw changes, passing a budget and affirming a slate of leaders—all of which passed easily by voice vote—no major decisions came before delegates during the July 29-30 assembly in North Newton, Kan.

At opening worship on July 29, Marty Troyer, pastor of Houston Mennonite Church, spoke on “In Houston as it is in Heaven.” Alluding to his book, The Gospel Next Door, published by Herald Press in June, Troyer asked, “What if what we longed for more than anything that is already here?”

Jesus preached that the kingdom of God is here, right now, he said. “The gospel is about how God is present every day in places like Houston.” Troyer shared a lesson he learned when he moved to Houston after living in Hesston, Kan. Sitting in a park, he heard seven different languages being spoken. He learned that God is active in the city and reflected on what he called the Great Commission of the Old Testament: “Seek the shalom of the city” (Jeremiah 29:7).

And alluding to Matthew 28:16-20, the text for the assembly, Troyer said, “We are called to make disciples, not only for the salvation of souls but for the salvation of the world.” And we don’t have to be perfect to do this. “The world doesn’t want our perfection but our presence,” he said.

Ruth Harder, pastor of Rainbow Mennonite Church, Kansas City, Kan., reported on using a Loaves and Fishes grant from WDC to support people in the church’s neighborhood who were forced to relocate from a low-income housing complex whose rental license was revoked due to negligence. The church created an advocacy team to help residents confront absentee landlords and federal officials, she said.

Rosie Jantz, associate pastor at Tabor Mennonite Church, rural Newton, Kan., said the church used a Loaves and Fishes grant to reach out to families in its community. The church has a Wednesday evening program that brings many children from the community who are not members of the church. More than 100 people come each week, including people from the church, she said.

Outgoing moderator Richard Gehring reported that a year ago, WDC had no conference minister. Clarence Rempel had retired that June, and Heidi Regier Kreider began work in August. In the past two months, WDC hired two associate conference ministers and formally installed them at this assembly: Byron Pellecer, who relates to churches in Texas and to the church-planting commission, and Kathy Neufeld Dunn, who works with Kreider to serve churches in Oklahoma, Kansas and Nebraska  and relates to the resource commission.

Phyllis Regier, WDC business manager, presented a budget for fiscal year 2016, which began on Feb. 1, and noted that because WDC was understaffed for much of the previous fiscal year, it only spent roughly 70 percent of its budget. This year’s budget calls for a 2 percent increase.

The assembly’s 149 delegate from 45 congregations also agreed to bylaw changes that served to clarify understandings of how appointments are made to the boards of various organizations from WDC.

Two congregations left WDC. Whitestone Mennonite Church, Hesston, Kan., had been an associate member and decided to discontinue this relationship. The church said the change was not because of anything WDC had done.

On the other hand, Inman (Kan.) Mennonite Church, decided in the spring to leave WDC and joined South Central Conference in June. Leon Heidebrecht, chair of the congregation, said Inman was among the 28 percent that voted against last year’s resolution that allowed congregations to decide whether or not pastors can perform same-sex weddings. This was not easy, he said, because Inman had been a member of WDC for 95 years.