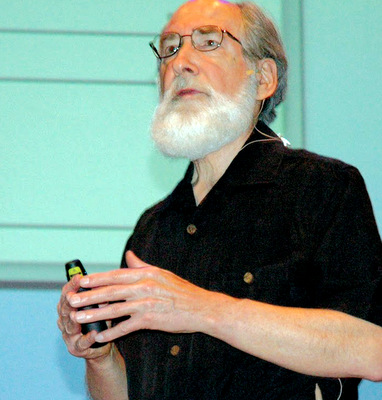 ELIZABETHTOWN, Pa. — Donald B. Kraybill has written about the forgiving Amish of Nickel Mines, Pa., and the revengeful Amish of Bergholz, Ohio.

Now, after 44 years of immersion in the Anabaptist worldview and more than two dozen books, some translated into nine languages, Kraybill is retiring from teaching at Elizabethtown College.

His retirement was celebrated April 9 as former students, family and colleagues shared stories of their journey with Kraybill.

Ben Riehl, one of Kraybill’s Amish friends, recalled a story in which he helped Kraybill look up the English meaning of an Amish term. Pointing to Kraybill’s computer, Riehl asked, “Why don’t you use that to translate?” Kraybill said, “I’m not sure how.” Because Riehl worked in a factory with computers, he was able to show Kraybill.

Riehl called it “cool and ironic — an eighth-grade Amish guy showing a college professor how to use his computer.”

The crowd laughed as Riehl thanked Kraybill for not trying to turn him into a Mennonite or a Democrat.

He thanked Kraybill for his “sensitive portrayal of a peculiar people to a curious public.”

“It must have been a challenge to interpret people who don’t want attention,” he said. “The fact that you have a lot of Amish friends speaks well of your effort. . . . We trust in you.”

Kraybill’s interest in Anabaptism began in 1970 during his doctoral program at Temple University in Philadelphia, where he studied under the late John A. Hostetler, a leading authority on Anabaptism. Kraybill’s research led to his appointment as director of the Young Center for Anabaptist and Pietist Studies in 1989, the same year he wrote The Riddle of Amish Culture.

When Kraybill took the stage, he explained the importance of founding the Young Center.

“It’s the only research organization to exist in the world dedicated to the sole study and public interpretation of Anabaptist and Pietist groups,” he said.

He said the mission has always been “to create a safe meeting place that welcomed people from all Anabaptist and Pietist communities — old and young, near and far, liberal and conservative, Old Order and assimilated.”

How do they flourish?

On April 21, Kraybill gave his last major address. He discussed the greatest Amish riddle: How do the Amish flourish in the midst of modernity?

The Amish negotiate with modernity, Kraybill said. They adapt. They compromise. They tinker with new technologies to make them their own. They “Amishize” things.

But the Amish are not undisciplined accommodators. They accept technologies that don’t threaten their core values. What outsiders perceive as a lack of freedom, the Amish see as liberation from technology’s demands and stresses.

When Kraybill uses the term “negotiate,” he means the Amish will do one of the following with technology: accept it, reject it or modify it. This process of negotiation enables their growth. How else could a people who reject cars, electricity, computers in the home and tractors in the field not only survive but thrive in a technological society?

Amish growth comes as a surprise to many. As recently as 1950 some predicted their demise.

“Some thought they were industrial road kill,” Kraybill said. They were wrong. The Amish population has doubled about every 20 years. Without evangelizing, the Amish population in North America is now 300,000, compared to 5,000 in 1900.

Not tempted to be Amish

Kraybill said he’s learned from the Amish “a lot about forgiveness and humility regarding both religious claims and human accomplishments.”

“The Amish are not judgmental toward other groups,” he said. The important thing is that a person “is trying to live a good life as a Presbyterian, Methodist, Catholic,” he said.

Kraybill said many people find Amish life attractive because they admire the groundedness, the centrality of family, the stability and slower pace of life. But he has never been tempted to become one.

“It would be hard for me to give up things like a car and computer and independent critical thinking,” he said. “I’m too immersed in individualistic culture at this stage of my life to be content in a communal group.”

Moreover, if everyone became Amish, Kraybill said, it would not be a pretty world.

“The modern world, for all its troubles, has produced many things of value,” he said. “We wouldn’t have modern medicine, science, theaters or even musical instruments.”

Kraybill believes the greatest threat to Amish life is their involvement in business, which thrusts them into greater engagement with the outside world. This, Kraybill said, “will have serious repercussions for greater use of technology, online communication, rational and strategic thinking, accumulation of wealth and the growing dichotomy between religious commitments and business affairs.”

Kraybill will continue research and writing under the auspices of the Young Center.