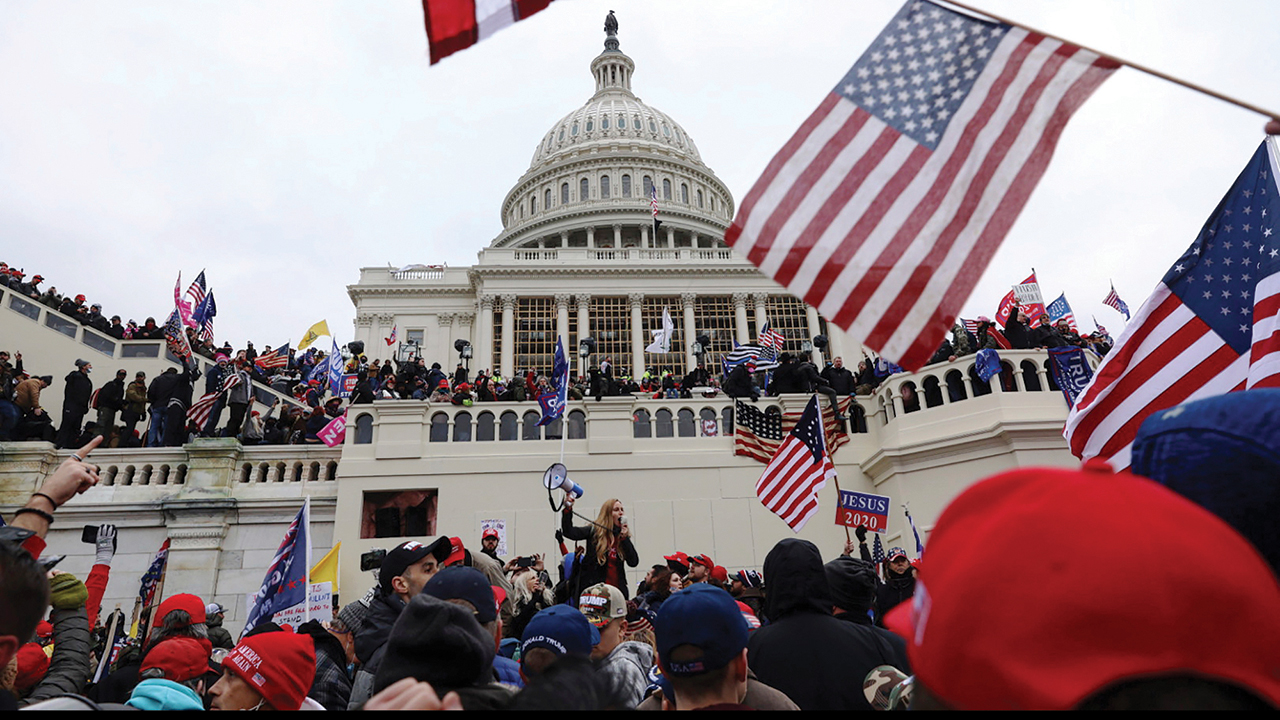 Describing insurrectionists who attacked the U.S. Capitol as “terrorists” who “perceived themselves to be Christians,” District of Columbia police officer Daniel Hodges told a congressional committee investigating the Jan. 6 insurrection on July 27 that the crowd massing on the building’s West Terrace brandished banners steeped in Christian symbolism along with those bearing the name Trump.

Hodges’ emotional remarks came in testimony offered alongside three other officers who rushed to the Capitol that day to defend it from an unsuccessful attempt by supporters of then-President Donald Trump to stop the certification of 2020 election results.

“It was clear the terrorists perceived themselves to be Christians,” Hodges said. “I saw the Christian flag directly to my front. Another read, ‘Jesus is my savior, Trump is my president.’ Another: ‘Jesus is king.’ ”

Later, Hodges described one insurrectionist who wore a shirt that bore the slogan “God, Guns and Trump.”

Images from Jan. 6 back up Hodges’ recollection, showing pervasive examples of Christian nationalist sentiment. A flag that waved above the first crowd to attack and overrun police officers was adorned with a fish painted in the colors of the American flag, positioned beneath the words “Proud American Christian.”

Jenny Cudd, an insurrectionist now facing federal charges, posted a video in which she justified her participation in the attack by declaring that God and country “are one and the same” and that “if we do not have our country, nothing else matters.” Still other insurrectionists led a prayer from the dais of the U.S. Senate after breaching the chamber.

An array of Christian leaders, including faculty from Wheaton College, an evangelical school, and former Southern Baptist leader Russell Moore, have since condemned religious expressions at the insurrection as satanic, blasphemous or heretical.

But Eric Metaxas — a conservative Christian commentator who admitted to assaulting an anti-Trump demonstrator in 2020 and emceed events in Washington protesting the 2020 election results in the weeks leading up to the insurrection — derided the House select committee on July 27, saying the U.S. is “at war.” He also claimed characterizing the events of January 6 as an insurrection amounts to “a lie.”

“If there was an insurrection, somebody’s brains would have been on the floor of the Capitol,” Metaxas said during an interview with Real America’s Voice.

When asked by Democrat Rep. Jamie Raskin of Maryland about his repeated use of the word “terrorist” to describe insurrectionists, Hodges read a section of the U.S. Code that defines domestic terrorism as “acts dangerous to human life that are a violation of the criminal laws of the United States or of any State” which take place in the U.S. and appear intended to “influence the policy of a government by intimidation or coercion” or “affect the conduct of a government by mass destruction, assassination or kidnapping.”

“To my perpetual confusion, I saw the ‘thin blue line’ flag — a symbol of support for law enforcement — more than once, being carried by the terrorists. They ignored our commands and continued to assault us,” he said.

Hodges became a fixture of coverage of Jan. 6 as footage showed him being crushed by a door while an attacker forcibly removed his gas mask. Hodges can be seen bleeding from his mouth as the mask is removed, screaming in agony throughout the ordeal.

Members of the select House committee investigating the insurrection played footage of that attack — which Hodges explained was one of many — and other violent incidents from that day during the hearing.

It is unclear if the committee plans to make the religious dimension of Jan. 6 a topic of discussion during the hearings.