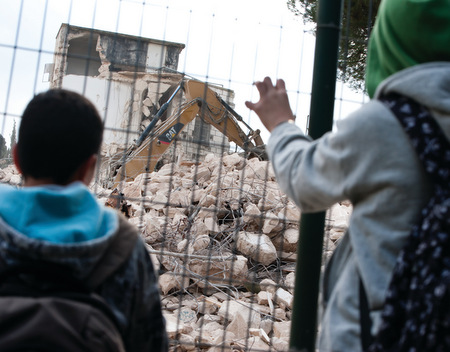 Palestinian children watch as a Caterpillar digging machine demolishes a Palestinian property to make way for new Jewish settlements in the East Jerusalem neighborhood of Sheikh Jarrah, Jan. 9, 2011. Divestment activists have targeted Caterpillar for its use by Israeli occupation forces. — Ryan Rodrick Beiler

Last month, Mennonite Church USA convention delegates delayed voting for two years on a resolution proposed by the Mennonite Palestine Israel Network calling for “withdrawing investments from corporations known to be profiting from the occupation and/or destruction of life and property in Israel-Palestine.”

The resolution “would have taken the church’s response to the Kairos call a further step forward toward justice and equity,” Khoury wrote. “However, we wanted to communicate our shared disappointment that the ‘Come and See’ transformational pilgrimages that exposed the reality in Palestine . . . fell short of a courageous resolution.”

The delayed vote was also interpreted by news media, supporters and critics as a break in momentum for the movement known as BDS — boycott, divestment and sanctions — to end the Israeli occupation and respect Palestinian human rights.

This summer, between a landslide vote by the United Church of Christ supporting divestment and an expected Episcopal Church decision rejecting it, MC USA’s delay emerged as a surprise twist.

At the beginning of that week, an opinion piece in the progressive U.S. Jewish newspaper Forward asked if the UCC vote was a “tipping point” for divestment. Two days later, a writer for Commentary, the neoconservative magazine founded by the American Jewish Committee, responded: “I for one thought the Mennonite Church was sure to pass BDS.”

A New York Times headline declared, “Mennonites and Episcopalians Say No, for Now, to Israel Divestment.” The Israeli newspaper Haaretz said “both the Episcopalian and Mennonite decision seemed to blunt what had been portrayed midweek as a major breakthrough for BDS following the UCC’s divestment decision.”

Not if, but when

Israeli partners voiced disappointment as well. Ruth Hiller, a Jewish activist, has shared with Mennonite groups about her work supporting conscientious objectors to the Israeli draft.

“I am disappointed, not so much by their inability to take the step toward BDS, which I agree is not an easy choice to make, but because of the decision to wait another two years,” she said. “Israel and Palestine do not have two years to wait.”

Sahar Vardi, a Jewish activist who has served three jail terms for refusing the Israeli draft, said: “I have no doubt that the Mennonite church will divest from Israeli occupation. It’s just a question of time, time in which more and more Palestinians lose their lands and personal freedoms, more Palestinians and Israelis lose their lives and your church keeps making a profit off of this.”

Canon Naim Ateek, a Palestinian Anglican who leads the Sabeel Ecumenical Liberation Theology Center in Jerusalem, responded to the Episcopal decision in a letter that he said applies to the Mennonites as well.

“We as Palestinians are daily humiliated by the Israeli forces. . . . Our homes are demolished daily by bulldozers manufactured in the United States,” Ateek wrote. “The Israeli government continues its daily violations of international law while the nations of the world remain silent.”

Sydney Levy of the U.S.-based Jewish Voice for Peace, a Menno­­-PIN partner, said dialogue is important, but it’s not enough.

“Dialogue is not going to bring peace in Israel and Palestine,” Levy said. “You bring an occupier and an occupied to sit at the table and talk about peace. That’s just not going to let you go very far unless you solve these conditions of inequality.”

Supporters think the result might have been different if the MC USA vote had been delayed for two days instead of two years. Convention leaders scheduled the initial discussion for one of the earliest sessions.

Palestinian pastor Alex Awad arrived to speak in Kansas City only to learn that the vote had already taken place.

“After I spent three days sharing, I could tell that the mood changed,” he said. “I spoke about our long history of partnership with the Mennonites and how much we appreciate all they have done for the Palestinians through the years. When I left the podium, people came to hug me with tears in their eyes.”

Jonathan Kuttab, Awad’s cousin, shared a similar experience after recently visiting a Mennonite church. After experiencing what he described as a “false peace narrative” that “ignored and negated Palestinians,” he was encouraged by how supportive people were once he had the chance to speak.

“The lesson is clear. Where we are absent, the Israeli narrative is so embedded that it controls the outcome,” he said. “When we are present, prepared and spend the time and energy in informing the church audience, the results are dramatically different.”

Such education and action is what delegates committed to in the final moments of the convention. Approved by unanimous vote, a “statement of support for our Palestinian and Israeli partners in peacemaking” pledged to spend the next two years in “learning and discernment” and to “pray for peace and act for peace.”

Ryan Rodrick Beiler is a freelance journalist who worked for MCC in Palestine and Israel from 2010 to 2014. He now lives in Oslo, Norway.